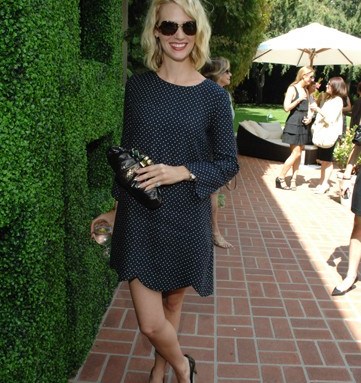 Irina Medavoy may have collected $9 million in donations for Barack Obama at a fundraiser she held for the candidate on Tuesday night, but she thought it best to keep the election off the table on Wednesday at her pal Wendy Goldberg’s house. “I think we’ve had enough politics for the moment, now let’s have fun,” she said.

Goldberg and her daughter Amanda hosted a lunch celebrating Bulgari’s newest handbags, so despite the hostess’ invitation for political discourse, the talk inevitably strayed toward fashion. “It really is all about the mix. Where else can you have Jackie Collins and the little girl from ‘Mamma Mia’ at the same party?” asked Wendy Goldberg.

January Jones let her hair loose, literally, sporting very un-“Mad Men” waves. “Someone asked me today if I’d forgotten to do my hair, and if I needed any hairspray,” she laughed. “It’s not the Fifties!”

As Rosanna Arquette, Florence Sloan and Lena Wald checked out the pleated leather satchels and jeweled minaudieres, starlet Amanda Seyfried delighted in the party favor, an oversized leather tote. “This is going to be my new computer bag,” she said. “Up ’til now, I’ve been carrying everything around in a Gelson’s bag.”