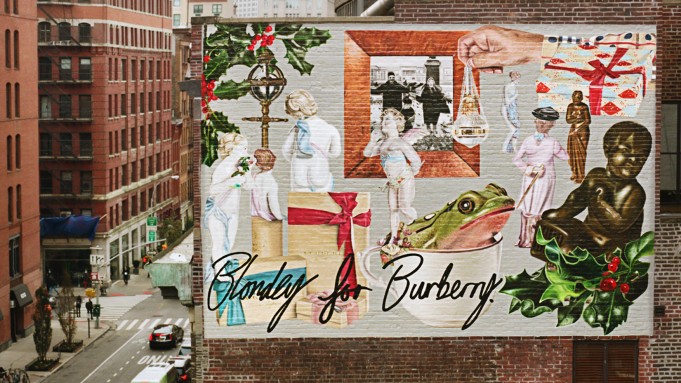 Just in time for the holidays, Burberry has partnered with 20-year-old artist and skateboard enthusiast Blondey McCoy for a series of three outdoor murals to be publicly displayed through the end of the year in downtown Manhattan.

This marks the first time McCoy, who has also collaborated on a jewelry collection with designer Stephen Webster, will be displaying his artwork in New York. The three large-scale installations show McCoy’s interpretation of a Christmas Eve party, the idea of charity and the spirit of family with each hand-painted from McCoy’s sketches by select artists.

“It’s amazing to give the painters the artwork on a piece of paper and watch them crack on,” explained the British native. “It’s a case of releasing control, which can be very hard for me.”

At 80-feet tall, the Flatiron district collage depicts the “narrative of a typical British Christmas Eve party” with items including mistletoe, Champagne and, of course, a Burberry check scarf.

One of the SoHo-installed works shows a hand holding a green apple, giving a nod to New York’s fruit-inspired nickname, and another holding a frog on an outstretched palm. The latter is a nod to the British brand’s trench campaign that features McCoy posing with one such amphibian on his chest.

The third mural, also in SoHo, is the most personal to the artist. The image depicts McCoy’s grandparents and father in London’s Trafalgar Square in the Seventies. “My work often features lots of sentimental objects,” he explained. “So it’s nothing new to me to display very personal things.”

Burberry’s chief creative officer and president Christopher Bailey, who last month revealed he would be fully leaving the brand by December of 2018 after 17 years with the company, collaborated with McCoy on the sentimental works. “There’s been constant back and forth,” explained the artist. “We both just want to make something we can both be proud of and I hope I make that as easy for him as he does for me.”