The 31-year-old actress returns to the small screen this Sunday. 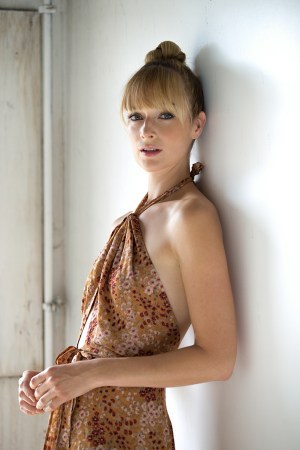 “Initially, I loved the script but…” Caitlin FitzGerald pauses. “I didn’t want to play a Fifties housewife.” Die-hards of Showtime’s smash “Masters of Sex” know that she of course relented. The 31-year-old actress and sometimes front-row fixture (e.g., here and here) plays Libby Masters, a Fifties housewife putting on a brave face while her marriage falls to pieces in the series, which returns for its third season Sunday.

For the uninitiated, the show chronicles the onset of the sexual revolution through the eyes of Dr. Bill Masters, whose research and that of his assistant-turned-lover Virginia Johnson (Lizzy Caplan), propelled the movement. FitzGerald plays the doctor’s docile wife, focused solely on conceiving. Libby’s arc over the first two seasons has been dramatic. By FitzGerald’s estimation, season one’s Libby is “very much a girl – I mean, she calls her husband ‘daddy’ in the first few episodes of the show,” FitzGerald says. “But she becomes really disillusioned with him, and pulls him off of the pedestal and comes into her own. We watch her become a woman.”

There is a marked change in Libby by season three, in which she sheds her sexual inhibitions — something she has resisted thus far — and gains a sense of empowerment. “Like so many women, she told herself a story about the nature of love and said to herself, ‘if I just marry the right guy and have babies and a perfect house, I will feel really good and safe and fulfilled.’ And we kind of watch that dream fall apart. I think that’s a dream that a lot of women still have,” FitzGerald says. “A lot of women want to believe the narrative whereby we’re saved by a prince and everything will be easy the rest of our lives, but it’s a lot more complicated than that. Libby has to think of who she is by herself in a lot of ways. Her story is one that I think is played out by women everywhere, honestly. It takes place in 1957, but it feels very contemporary.”

While the sexual tension between Bill and Virginia has built from their first on-screen moment together, fans were perhaps shocked to see a lip lock between Virginia and Libby in season three’s promos. “I can’t say very much — it’s a complicated moment,” FitzGerald teases.

She does, however, divulge we will continue to see fantastic fashions from Mrs. Masters. “This season, they put these amazing acrylic nails on me that I’d never had before; it’s amazing how ladylike I felt,” FitzGerald says. “In my real life I don’t even own a blow-dryer, and to become Libby Masters, I have to have two hours of hair and makeup. Since the show, I’ve thought a lot more about polishing the way I look. Left to my own devices, I sort of dress like a 14-year-old boy most of the time, but I’ve gotten really excited about more tailored dresses and how stupidly good it feels when your jewelry matches your clothes.”

She’ll be in full force on screens Sunday, acrylic nails and all.