From Versace to Pitusa, brands rush to applaud Caitlyn's choices — of their products. 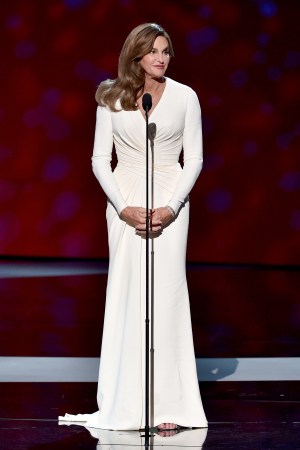 On Wednesday night, Caitlyn Jenner wore a striking long-sleeved white Atelier Versace dress to accept the Arthur Ashe Award for Courage at the ESPY Awards. The sports icon spoke about the struggles of the transgender community during her speech, but during one moment of levity she asked the fashion police for a favor: “Please be kind [to] me. I’m new at this.”

Actually, she didn’t even have to ask.

“Caitlyn’s speech was touching!” Donatella Versace told WWD. “Her words are relevant and she is an inspiration to the world and me.”

Even before Jenner made her debut on the cover of Vanity Fair, fashion brands of all stripes, big and small, were tripping over themselves to claim credit for her various wardrobe choices.

“Be who you are and feel beautiful,” read the caption on Zac Posen’s Instagram photo of the Vanity Fair shoot, which featured one of his curve-hugging dresses. He was back a few weeks later: “Screen test @vanityfair #CallMeCaitlyn in a #ZacPosen gown available at @bergdorfs.”

DKNY tweeted a picture of Jenner in one of its designs, though later deleted the post without explanation, reportedly at Vanity Fair’s request. Even the eyewear brand Dita sent out a press release boasting that its “‘Eclipse’ cat eye gradient sunglasses in tortoise” were in the Annie Leibovitz shoot for the magazine.

To maximize the moment on Wednesday, Jenner chose to skip the red carpet at the ESPY Awards, but before the event, the jewelry company Beladora had already sent out a blast claiming she was to wear a pair of its emerald-and-pearl earrings.

Once Jenner was onstage, Versace posted an image on Instagram of her in the Atelier dress, calling her “a vision in white.”

And it’s not just the big fashion houses that are pledging their allegiance to the star perhaps in hopes of return on investment. “Caitlyn Jenner is a Fan of Pitusa!” read the subject line of one press release, from a lesser-known brand with an especially keen eye that pointed out that a Pitusa dress was spotted in Jenner’s closet during an episode of “Keeping Up with the Kardashians.” Trashy Lingerie, which supplied the corset on Vanity Fair’s cover, even has a special shout out on its homepage: “As seen on Caitlyn Jenner.”

With Jenner’s new E! reality show “I Am Cait” premiering July 26, one can expect the announcements and press releases to keep on coming, as clothing labels strive to come up with new and imaginative ways to align themselves with the budding fashionista.