Finn Wolfhard — who stars as Mike on "Stranger Things" and is the newly minted face of Saint Laurent's latest campaign — Ayla Tesler-Mabe, Jack Anderson and Malcolm Craig are all artists in their own right.

Calpurnia is in the middle of soundcheck at the Manhattan venue Irving Plaza. Vocalist and guitarist Finn Wolfhard, guitarist Ayla Tesler-Mabe, bassist Jack Anderson and drummer Malcolm Craig are headlining a show that night — and despite there being a good four hours before the concert begins, a winding line of eager teenagers snakes down the street. A couple of minutes pass and many more fans join the queue. They’re here to see the rock band from Vancouver on their first American tour, whose lead singer is well-documented as Mike from “Stranger Things.” If Calpurnia listeners came to know the band because of Wolfhard, they stayed for the surf-tinged rock music that makes listeners want to get up and dance.

It’s easy to forget that Wolfhard and Craig are 16 years old and Anderson and Tesler-Mabe are 18. They operate on a level of professionalism that belies their teenage years. They listen to classic musicians (read: old stuff), like B.B. King, Wes Montgomery and Bob Dylan. During soundcheck, Tesler-Mabe requests as much volume in her microphone as possible in the same polite way a businessperson might send an e-mail to a client. Craig, a quiet young man with fair skin and curly hair, keeps rhythm with restrained elegance. 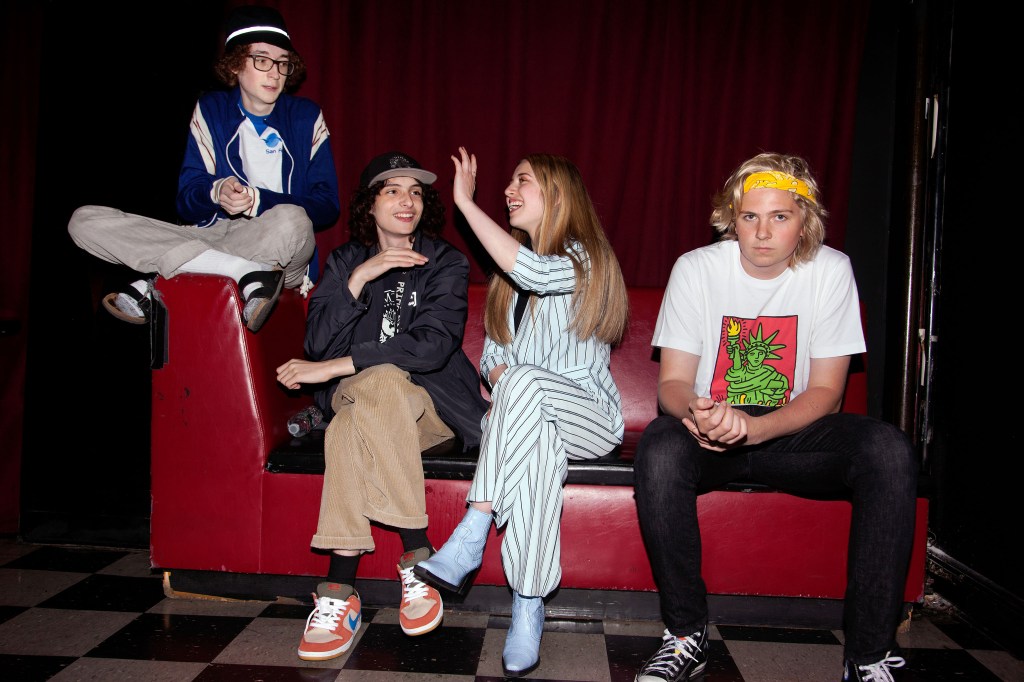 And then, just as quickly as they’ve convinced you they’re adults, the band talks about not having their licenses to drive yet, or how Anderson and Tesler-Mabe are graduating high school soon (“I have two physics finals, a calculus final and an English final next week,” Anderson says) and when they speak of home, really they’re talking about their parents’ houses. They yell over one another and tell corny jokes and try to give each other high fives but they miss, and then they laugh about it. They’re kids. Yet so much interest and hype has grown around them that people expect them to be adults about all of this and in some ways they fulfill that expectation: They’re adept at dealing with attention, fans, media, even as their playfulness shines through.

Anderson and Craig are certainly not as gregarious as Wolfhard and Tesler-Mabe. Craig is the quietest, and Anderson takes a second to open up. But they are every bit as artistic as their counterparts — Tesler-Mabe, who’s in another band called Ludic, and Wolfhard, well, he has his various duties on-screen and pacing Hollywood’s red carpets.

Anderson says photography is one of his other art endeavors. He downplays his abilities, adding, “I goof around, making weird noises in my attic and calling it noise music and never sharing it for the world.”

But Wolfhard backs him up. “Jack is amazing with tech and stuff,” he says. “So whenever he gets his hands on tape or whatever, he’ll just like — his mind races like a mechanic. He approaches an instrument like it’s a car.”

“I modded a cassette recorder, one of those dictaphones,” Anderson adds, bolstered by Wolfhard’s encouragement. “I’m such a nerd, g-dammit.”

“Just say it! No, just own it,” Wolfhard cajoles.

“I found a resistor that determines the speed of the motor, which controls the tape,” Anderson continues. “Then I put a knob in there, so I can change the speeds and play the cassette recorder like an instrument.” 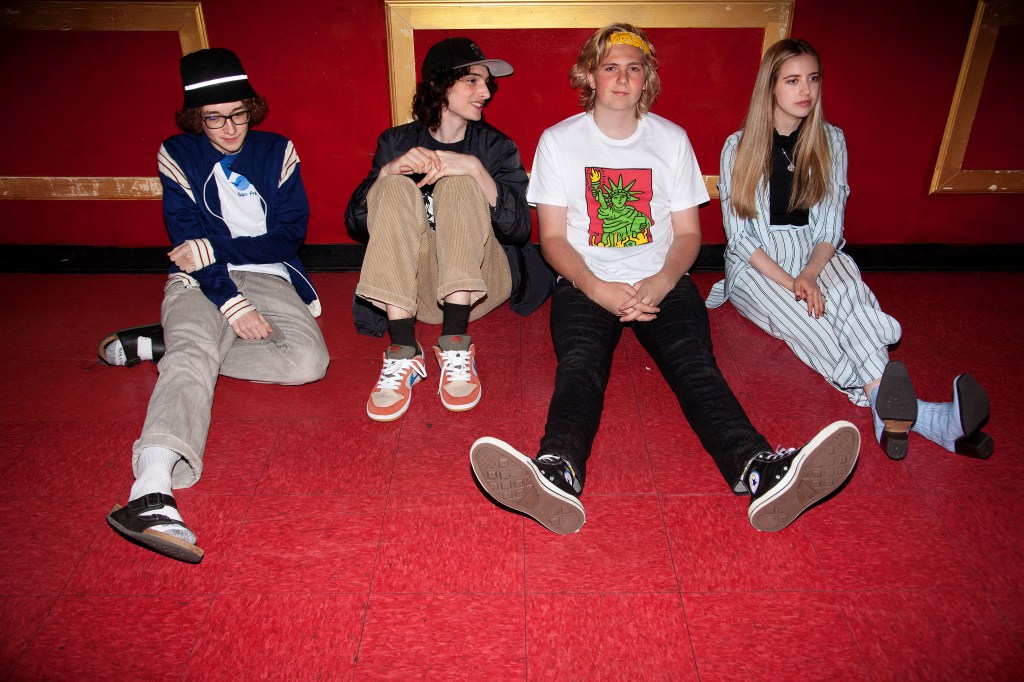 “Right now, I’ve got my mind super set on painting a big acrylic piece and putting it on a shirt for Calpurnia,” Craig says. “Also, I’m looking at doing a mural on the garage door of my house at some point.”

“Everyone’s going to know where Malcolm lives,” Anderson laughs. “When all four of us are together creating music, that’s when the direction is decided.”

They’ve spent the past couple of weeks in a van driven by their tour manager, listening to what Tesler-Mabe refers to as “road trip music” — records like “Tattoo You” by the Rolling Stones. It’s not often that the four are all at home in Vancouver at the same time, given Wolfhard’s schedule of filming “Stranger Things” in Atlanta; working on a few movies, including “The Addams Family” and “The Goldfinch,” plus being cast in Saint Laurent’s latest campaign. Now that they’re sequestered in a car with one another, the band is getting to work on writing their new album. Wolfhard says they’ve got nine or 10 songs down, and are expanding their creative endeavors when it comes to recording. 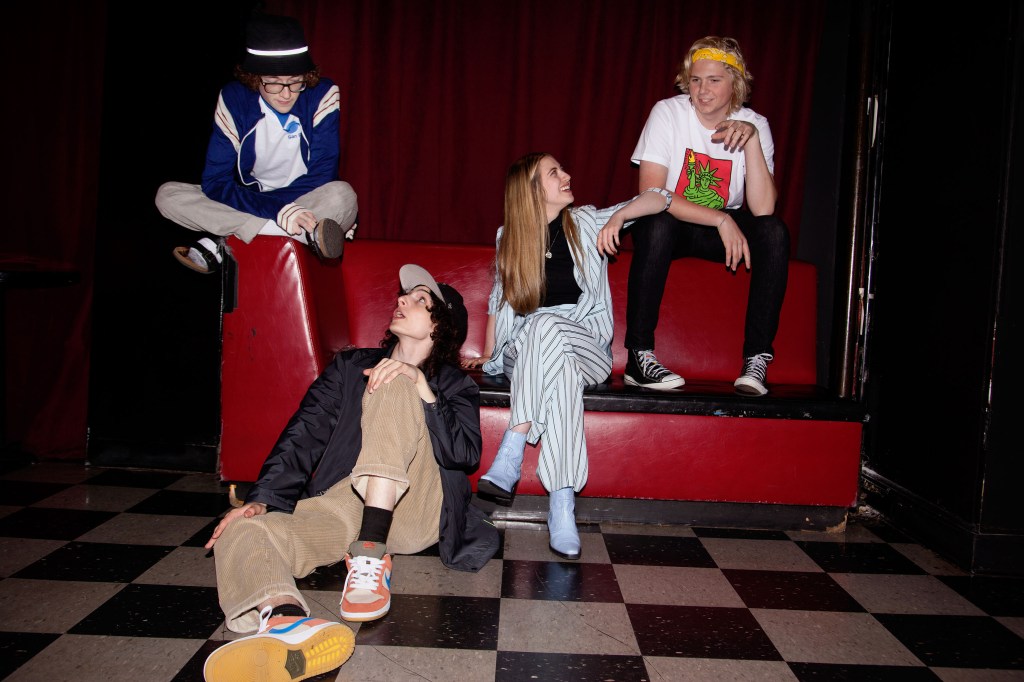 “I’m really, really interested in producing and how it sounds,” he explains. “We recorded the demo a few months ago and we all took a crack at mixing it and engineering. It was so fun to have control of our own stuff, no matter how terrible it sounded. [At first] I tried to mix and I was just like, ‘What does this mean?’ I sent it to Ayla and I was like ‘Just, just, you do it. Just fix it.’”

“Hey, there was a good snare tone going on there,” Tesler-Mabe says encouragingly, smiling with every tooth showing. “That’s all that matters.”

The band has started testing out this new material on their fans. Because Wolfhard, Tesler-Mabe, Anderson and Craig came together as a group just last year, their catalogue is somewhat slim. But with fresh songs being written, they can play at live shows and see what the response is.

“They’re so into it,” Tesler-Mabe says of the crowds. “What’s most amazing is even if we only play a song once, by the next show, everyone knows the words.”