Francisco Costa and Italo Zucchelli threw a party in Los Angeles Thursday night at, literally, “the intersection of art and fashion.” 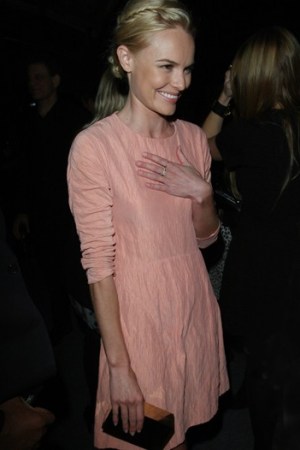 Francisco Costa and Italo Zucchelli threw a party in Los Angeles Thursday night at, literally, “the intersection of art and fashion.” The soiree, in partnership with hip new art fund Los Angeles Nomadic Division (LAND), took place across the street from Los Angeles Art Month headquarters in the Pacific Design Center and next door to the Balenciaga store on Melrose.

This story first appeared in the February 1, 2010 issue of WWD. Subscribe Today.

Kate Bosworth, Abbie Cornish and Ryan Phillippe, Ali Larter, and Bijou Phillips came to check out the art. But Pénelope Cruz had her own agenda: “I brought my friends in the Calvin family together with my friend [director] Paul Haggis, who has a foundation called Artists for Peace and Justice that has been doing work with Haiti. It’s providing relief but also long term investment in education,” she said.

Nearby, Ginnifer Goodwin analyzed an installation by Jean Shin. Shin took the space-age swaths of fabric that Costa used for his Spring 2010 collection (the silhouettes left behind where the clothes had been cut out were still apparent) and transformed them into banners hung in the cavernous space. “I think that’s part of my dress,” said the actress.