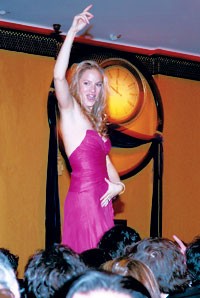 “Yvonne is a great friend of mine,” hollered Amanda Brooks while writhing to the electropop tunes. “But I really relate to what she sings about, being a mother and a neurotic New Yorker.”

That same night, a more staid crowd with fewer neuroses toasted the New York Botanical Garden at the annual Orchid Dinner at the Rainbow Room. Delphine Krakoff told friends that she and her husband, Reed, are expecting another baby. (The Krakoffs cochaired the event.) They are also having Richard Meier design a house for them in Palm Beach. “I was so embarrassed, but I asked [Meier] if maybe, perhaps, he might design me a broom closet,” Delphine said, sheepishly, of her experiences thus far with the architect.

The next night, a clique of designers, fashion publicists, the requisite hangers-on and one Bush twin (Barbara) piled into Salon for Fabian Basabe’s and Martina Borgomanero’s nuptial “Winter Ball.” Many of the evening’s guests (who included Peter Som, Douglas Hannant and Adam Lippes) noted the ratio of paparazzi to invitees. (Guess which was higher.) Coralie Charriol admired the Egon Schiele-inspired etchings on the wall before ending up dancing on the bar with the giddy groom; Basabe was keeping stock of the alcohol on hand — “I didn’t go through 80 bottles of Patron! Or maybe I did,” he exclaimed; and one social reporter called the evening the Meatpacking District’s version of the Trump wedding.

“This is how I always dreamed it would be,” gushed Borgomanero.