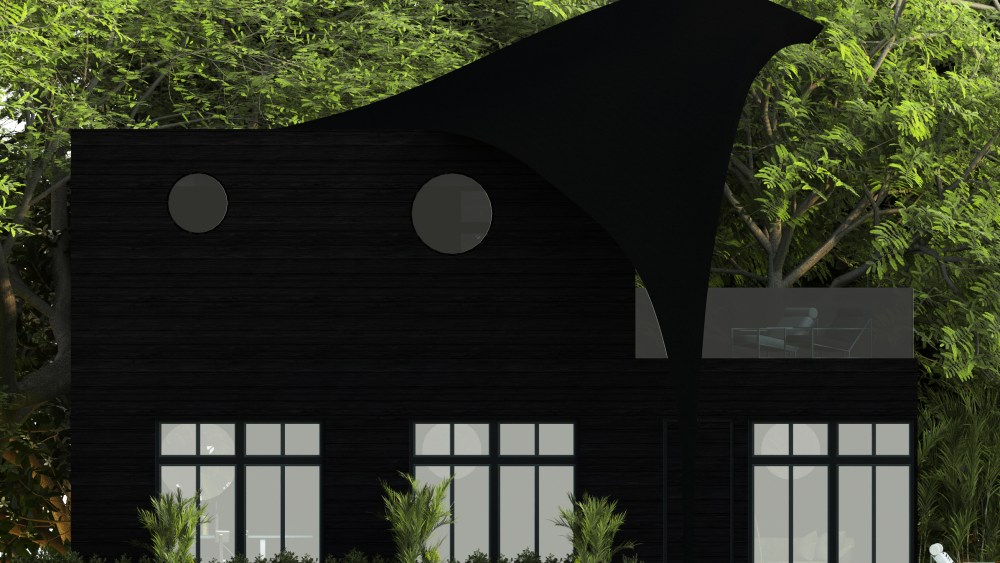 With the help of fast-moving developer Robbie Antonio, Camilla Staerk and Helena Christensen are redefining the meaning of a designer house.

The creative duo behind the New York-based design studio Staerk Christensen are the newest boldface names to align with Antonio’s Revolution Precrafted Properties. Recruiting fashion-minded talent to reimagine a prefab house was new territory for the ardent art collector and enterprising developer. Antonio runs Antonio Development in New York and is managing director of Century Properties in Asia. He has collaborated with Giorgio Armani for Armani Casa, Versace and Missoni among many others.

Staerk and Christensen impressed him with their well-defined intent and clear-eyed directives.

Originally hired to handle the interiors, the pair were so assured in their vision that they were asked to take on every last post and beam. “They said, ‘You know, you guys have so many opinions about how you want the structure to be for the furniture you’re designing. So why don’t you just do the whole house?’’ Staerk said. “We could not believe they gave us that whole responsibility. We couldn’t believe it but we definitely thought they should.”

Traces of Staerk’s and Christensen’s Danish roots are evident in the dual-level, two-bedroom, two-bathroom prefab home. Inspired by a traditional Scandinavian cabin, their design is a glass and stained black wood house. The curved structure is meant to be reminiscent of a swallow in flight. However unlikely it might sound, they enhanced their design with inspiration from the craftsmanship of a viking ship. The silhouette of the swallow-inspired home resembles the hull of viking ship turned upside-down, they explained.

“Ships hulls have the wingspan of a bird. To us, that means a lot. Both of us grew up in Denmark. The sound and the visuals of swallows flying low on summer nights is just something that stayed within us. It’s a very peaceful place for both of us to go back into in our memories,” Staerk said.

Designed to be built anywhere in the world, the first prototype for each structure may be set up in Malibu or Montauk so that potential clients can walk through and experience the house firsthand. As with any prefabricated home, the structure requires a good amount of land and then is built for you. With shipping and building, the $228,000 unit can be somewhat altered to accommodate the climate that the buyer lives in.

Staying true to their healthy Scandinavian upbringing, the duo is also creating a spa pavilion for $27,300 and a gym for $153,000. Through the years, rugs, lamps, glassware, interiors, furniture, pillows, throws and bedspreads and even glamping-quality safari tents are categories they have delved into. With the help of the Brooklyn-based Bower, the duo is creating a mirror collection which will include a wardrobe-screen divider that also can double as a martini bar. And glassware is on deck with Danish company Mater, with furniture to follow. These new endeavors are expected to debut around the same time as the Revolution prototype.

While Staerk earned a degree in fashion and textiles at Ravensbourne College in London, the “absolutely self-taught” Christensen has designed lamps for Habitat and gleaned knowledge from the legendary photographers as a model. “I really can’t think of a career that gives you more versatile options of branching out, learning and absorbing everything you possibly can if that’s what you want. I guess that’s what I did. With our combined background and knowledge, we get by,” Christensen said.

That need to always be learning and searching means they often can’t write down, sketch or photograph their ideas fast enough — a habit that other friends might not be so accepting of. And even though they each approach creativity with a different lens, somehow it all comes into focus. “When we met, we were so different and in that difference we found a common ground. Camilla’s form of expression, the way she looks visually, the pieces she designs, the homes she lives in is completely opposite of mine — in all ways. Somehow over the years we have approached each other in all ways — first and foremost as friends, but also learning from each other and opening up to each other’s differences,” Christensen said.

“We spur each other on,” Staerk added. “We clicked creatively from the first time we met. It was from immense respect for each other’s work. Then we found this way of expression together and we just felt so lucky.”