The "Sex and the City" author talks about aging in a society that places a premium on youth.

Candace Bushnell wants to talk about women over 50.

Despite the push for inclusivity in recent years, the author of “Sex and the City” and most recently “Is There Still Sex in the City?,” said this is one area that is still largely neglected by fashion and beauty companies.

“There really seems to be this idea of the over-50 woman consumer, who is really overlooked,” Bushnell told WWD while in Boston.

That’s ironic. Because at 60, the author-turned-television producer said she still loves playing with fashion. (“I never wear the same thing all day,” she said.) The part-time Manhattanite and part-time Hamptons resident moves from luncheons, to speaking events to dinners in the space of one day, after all. She needs more than one look.

While in Boston, Bushnell is dressed in a sleek navy blue blazer, black pants and shiny bejeweled stiletto booties. And much like many New York women, Bushnell could pass for at least a decade younger than she really is.

She was in Beantown for the 11th annual Boston Book Festival in October, but back in the Big Apple the following week, and is scheduled to speak at The Atlantic’s Aging Up conference. Each time, Bushnell was pondering what it means to be aging in a society that places a premium on youth. She discusses this concept in her latest novel, too.

“Ten years ago, people were really very, very resistant to this idea — not even trying to appeal to the woman over 50. Nobody even wants that woman as a consumer,” Bushnell said. “I’ve had so many men, you know, really powerful men, say, ‘A woman over 50 is a group of people I have never once thought about in my life.’

“I think it’s about companies and basically, it’s kind of about men,” she continued. “Because men are usually the ones who are behind these kinds of corporate decisions. There’s usually a man at the very, very top, who says, ‘You know what? I don’t care about women over 50.’ And that colors the attitude that a company brings toward women.” 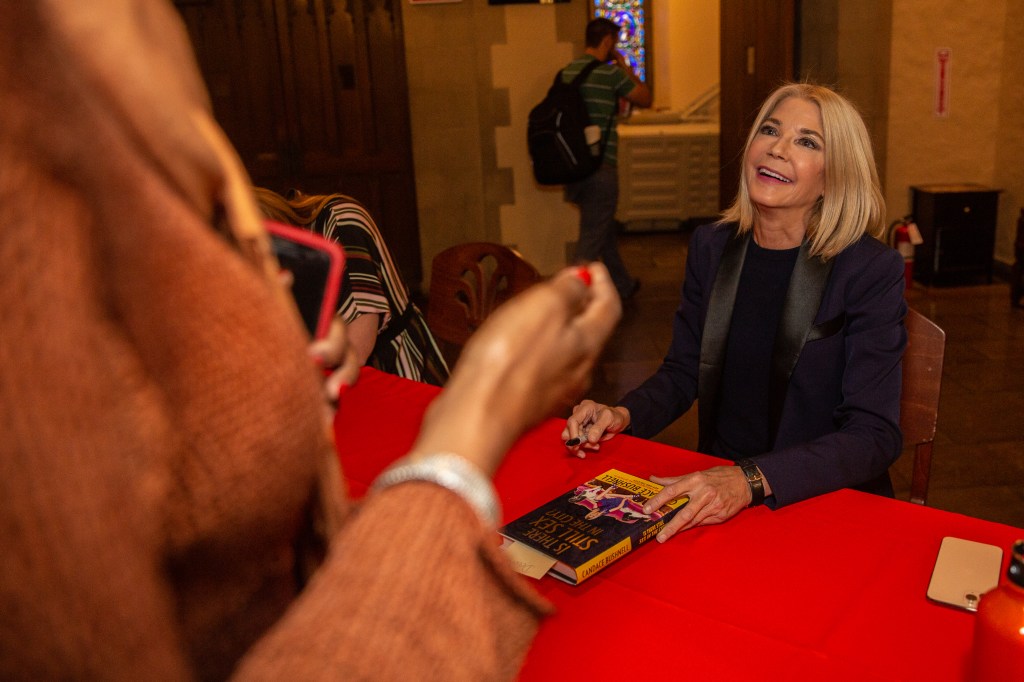 Bushnell added that it’s not just men. For her, getting older also meant coming to terms with her own ageism. Around 50, she said, she would wonder if it was even worth starting new projects.

“I had so many negative ideas of aging in my head that I couldn’t help but be negative toward myself,” Bushnell said. “We all are, inside of us, ageist.”

Despite this, Bushnell did continue working into middle age. Her latest novel, “Is There Still Sex in the City?,” was released in August and is currently being adapted for a television show, of which Bushnell is an executive producer and writing the pilot episode.

Cultural perceptions of aging have also started to shift in the last decade or so. Brands like ThirdLove, J. Crew and CoverGirl have featured middle-aged female models. Actress Vanessa Redgrave was the face of Gucci’s 2017 Resort campaign. She was 79 at the time. Seventy-five-year old Lauren Hutton walked in the Valentino couture show in Paris earlier this year. Iris Apfel, 97, got signed with IMG this year.

Still, with each step forward, there seems to be two steps back.

“That’s something that is changing right now,” Bushnell said. “It’s changing just by women speaking out and saying, ‘I’m here.’ I think women over 50 are saying, ‘Hey, we’re here and we’re a demographic; don’t ignore it.’ Young people are over.”

But she added laughing, “I’m kidding. I mean, people are different. Everybody is different shapes and sizes. I think that’s what it’s really about.”