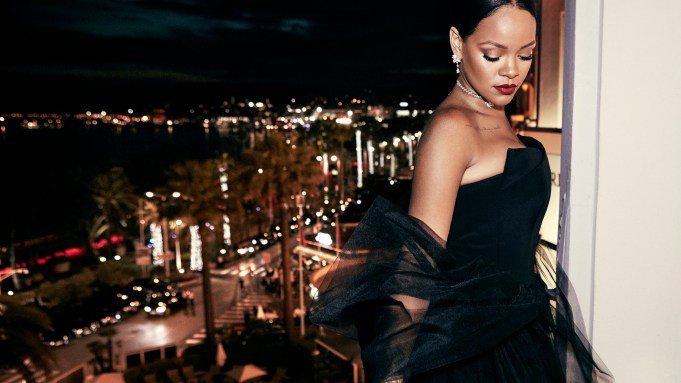 ROCK STAR: There were literally diamonds in the sky at the 2017 Cannes Film Festival launch of the Rihanna Loves Chopard collaboration in the jeweler’s rooftop suite of the Martinez hotel Thursday night.

Sweeping into the venue in a custom strapless black silk crêpe tailored gown and black tulle overcoat by Ralph & Russo, Rihanna joined Caroline Scheufele, artistic director and copresident of Chopard, to inspect a row of models sporting her creations as the guests gathered around them.

“She’s incredible in many ways, not just as a musician but also for her strong feminine energy and this message of being authentic and comfortable in your own skin,” said Petra Nemcová, adding that she found the jewelry to be “very youthful.”

The model, who is global ambassador for Chopard, Tumi and Mercedes-Benz, revealed she has collaborated with Aquazzura on a line of heart-embellished flats and heels for her Happy Hearts Fund charity, due out in May. When asked what her favorite Rihanna song was, she replied, “‘Umbrella,’” adding: “It’s early Rihanna, but it’s the song that really sticks in my mind.”

“The Hobbit” star Aidan Turner, who earlier in the day had attended the opening of the Cannes leg of Chopard’s “Glittering Prizes” exhibition in collaboration with Vogue and curated by Ivan Shaw, was hard pushed to name a song. “Oh don’t ask me that….‘Diamonds’ — yes, perfect!” he laughed after a tip-off from a friend. The actor said he has series four of “Poldark” coming out in September.

“I’m Jamaican, so Rihanna speaks to my Caribbean vibe,” said Winnie Harlow who prefers “Watch n’ Learn.” “It’s sexy,” said the model, who had just attended her first Cannes premiere. “It was so magical — I felt like a Disney princess or Cinderella, in this blue gown by Zuhair Murad, though I was scared I was going to trip a couple of times,” she said, adding: “A long dress, heels and steps is not a good combination.”

At Home With Monica Bellucci >>