Cannes: All for the Photo Op

Before the 58th edition of Cannes winds up on Sunday, firms will have invested millions to coddle and wrangle stars into their wares.

By Marcy Medina and Miles Socha on May 20, 2005
View Slideshow 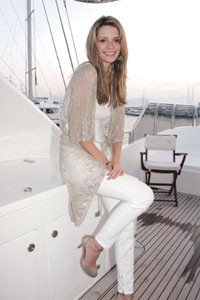 CANNES — Ever since hairstylist Jacques Dessange twisted Brigitte Bardot’s famous locks into a chignon at the film festival here, the floodgates have been open for fashion and beauty firms to ride the coattails of the annual event in search of a publicity windfall.

And before the 58th edition winds down on Sunday, firms will have invested millions to coddle, pamper and wrangle stars into their dresses, jewels, shoes and makeup.

Involvements run the gamut from official sponsors such as Chopard and L’Oreal to small fashion houses without on-site fashion suites, but which nevertheless try to get a frock or a necklace onto a photographed actress.

Dessange, for example, has been a staple at the event for 30 years and invites all guests for a free hair session with one of its 20 styles — gratis, of course.

“The film festival is very important for us,” a spokeswoman for the Paris-based firm said. “It is, after all, our image of glamour and elegance. I think there is a return to that with actors like Scarlett Johansson. For young people, it is very important. For us, the investment we make at Cannes pays off, because of the image it brings.”

For the fourth year, Dessange has some competition from Frederic Fekkai, who is offering mobile styling services along with two other stylists, plus appointments in the Nikki Beach venue. “The international presence here gives me a chance to take the company more global,” said Fekkai, who made his name in New York, Beverly Hills and Palm Beach. “I realized this when I did Michelle Yeoh’s hair a few years ago and nobody in the States cared who she was, but I got incredible press in Asia. Cannes is a place where glamour from all over the world comes together.”

The commercial quotient of the festival was upped about seven years ago when giants such as L’Oreal appeared on the scene, increasing the competition. As an official partner, L’Oreal paints the faces of at least 600 actors and other invited guests. It also dispatches to the red carpet its bevy of high-profile ambassadors including, this year, Aishwarya Rai, Eva Longoria and Milla Jovovich.

“The Cannes festival is a unique worldwide event that’s covered in an incredible number of magazines and newspapers,” said Patrick Rabain, the president of L’Oreal’s consumer products division. “I’m sure even in Mongolia there are papers showing what people [are up to] in Cannes.”

Indeed, Cannes has become a forum for all types of beauty messages. The Breast Cancer Fund, for instance, is using the festival to showcase its Campaign for Safe Cosmetics.

But over the first 10 days this year, most attendees lamented a dearth of A-list actresses, due mostly to a selection of films skewed to the intellectual and underground, or with male-driven story lines.

Nevertheless, competition for credits is such that any wardrobing opportunity around Cannes, not only the red carpet, is exploited to the fullest. These include photo calls, press conferences, parties and roundtable interviews. Even a trip through the lobby of the chic Martinez Hotel can turn into an impromptu fashion shoot for a pretty actress in a great outfit.

Mischa Barton, in town last Friday for a photo call on Saturday, was staying at the Sofitel Hotel, but made the designer-heavy Martinez one of her first stops. After all, Giorgio Armani, Fendi, Versace and Roberto Cavalli have suites there. Barton left wearing one of Cavalli’s printed minidresses and was immediately accosted by paparazzi in the lobby. Hours later, Cavalli’s New York reps at C&M Media had transmitted the photo to fashion press worldwide. They should have made sure that Barton hadn’t chosen a dress in the same print group that Paris Hilton had worn to her photo call the day before, though.

Even the digits of an actress are up for grabs. Late on Tuesday, Christian Dior dispatched text messages to key editors to let them know Tilda Swinton was wearing two of its rings to the premiere of “Broken Flowers.”

To be sure, access to practically unlimited jewels and dresses at the sundry fashion suites is a powerful attraction for many stars. Told that Chanel was present with a suite at Cannes, Kim Gordon, who stars in “Last Days,” said, “Wow, that sounds good.”

Kelly Reilly, to whom Chopard awarded its annual trophy as most promising female talent, confessed she’s more comfortable in “cutoff jeans and a T-shirt. I like to feel myself.” Reilly didn’t work with a stylist in Cannes, but had no shortage of direct offers. To accept her prize, she wore a vintage Versace couture dress worlds away from her preferred mode of dress.

Vintage, in fact, turned out to be a major trend at this year’s festival, with Natalie Portman donning vintage Chanel couture; Charlotte Rampling, a vintage Yohji Yamamoto, and Sharon Stone shrugging on a lightweight mink bolero from the early Eighties that will be similar to one she will wear — and presumably doff — in the forthcoming “Basic Instinct 2.” Other golden-oldie moments included Michelle Monaghan in a two-year-old Elie Saab couture gown and Mischa Barton in a vintage Roberto Cavalli beaded tunic, which she wore over white jeans.

Still, fashion continues to rate as only a footnote at Cannes, which has always taken a highbrow approach to the art of filmmaking. Only recently has it embraced the more commercial aspects of the celebrity circus a la the Academy Awards.

Caroline Gruosi-Scheufele, co-president of Chopard, credited “the American influence” and presence in Cannes for opening up marketing opportunities for brands like hers, a sponsor for the past eight years. The house threw a party on Sunday for Stone, who is said to have a $250,000 deal with the jeweler (Chopard declined to comment on it). Ironically, the actress showed up at Sunday’s party in Bulgari earrings along with her Chopard baubles. Gruosi-Scheufele declined to say how much Chopard spends at Cannes, but said it represents less than 5 percent of its annual communications and promotion budget. Still, it’s not small change to be a presenting sponsor, plus take an entire floor of the Majestic Hotel, pay a legion of security guards (who accompany the jewels everywhere) and provide hospitality tables for clients, press and celebrities at the hotel’s beachfront restaurant.

Most design houses take just one hotel suite to show their wares, then another for the staff to sleep in. But hotels on the Croisette start at 500 euros, or $630, a night and require an 11-night stay.

And even when a company has been at it for three years, like Tod’s, the process is not without its snafus. When its Paris and New York publicists checked into the Carlton last week, they found the suite they had reserved as a showroom had been inadvertently given away and was no longer available, forcing them to show their shoes and bags from the two cramped guest rooms. Samuel L. Jackson, who was happy to take the free shoes, nevertheless said, “That’s some f—-d s–t.”

Perhaps it really didn’t matter in the end, since Tod’s New York publicist Caroline Bitkower resorted to doing what most in Cannes do — ferrying her wares on foot to celebrities’ hotel rooms. After traversing the Croisette in search of Brittany Murphy on Tuesday with just minutes to spare before her “Sin City” photo call, she got the payoff when the actress carried a Tod’s clutch for photographers. It was just barely visible in one shot.

Missoni’s VIP consultant, Gerlinde Hobel, stayed in the Martinez and tossed dresses into her bag as she made an impromptu rendezvous via cell phone. However, it was a past relationship with Julie Delpy that got her dress on the actress for Tuesday’s premiere of “Broken Flowers.”

Still others are more low key. Edward O’Sullivan, Ralph Lauren’s VIP liaison, in town to dress Hayden Christensen for “Star Wars: Episode III-Revenge of the Sith,” and Joely Richardson for the AmFar party on Thursday, said, “Ralph doesn’t really care to be here and he trusts me to make our presence at AmFar known, but it’s not the end-all, be-all,” adding the company opened a store on the Croisette this week, but chose not to publicize it with a party as Fendi and Jean Paul Gaultier have done in past years.

And it must be said some fashion firms do even less to capitalize on the publicity value of their efforts. Van Cleef & Arpels, for example, hosted a swanky, star-studded, black-tie affair aboard a yacht last Monday — and barred press from attending.