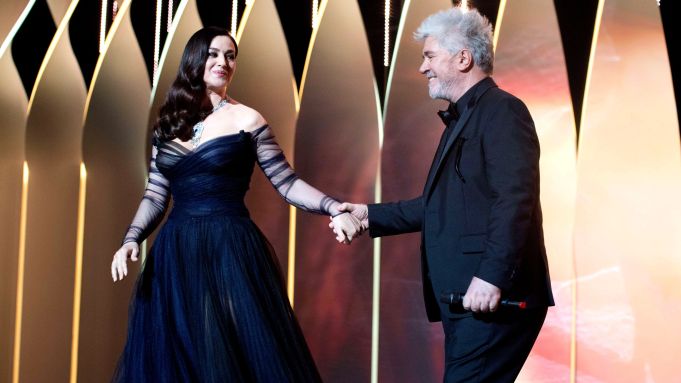 Ramped up security failed to spoil the party mood at the opening night ceremony for the 70th edition of the Cannes Film Festival on Wednesday night.

Other head turners on the night included Naomie Harris, who wore a sherbet-hued custom gown by Gucci, and Elle Fanning, who made her red carpet debut as a L’Oréal Paris ambassador in a bird of paradise gown by Vivienne Westwood Couture daubed with galaxy-inspired motifs. The ethereal indie actress stars in two movies being screened at the festival: Sofia Coppola’s in-competition “The Beguiled” and John Cameron Mitchell’s “How to Talk to Girls at Parties.”

“The energy was vibrating. If anyone had any doubt what glamour is about, this is it: it’s the red carpet, it’s the Hollywood movie stars, it’s the palm trees and the sunshine, it’s just beautiful — not forgetting the great movies,” said Eva Herzigova, who opted for a gold-embroidered Roberto Cavalli gown.

Looking dapper in a black Dolce & Gabbana suit, Adrien Brody said he was feeling a little nostalgic. “Cannes has a dear place in my heart. ‘The Pianist’ premiered here at the Palais [in 2002] and was the recipient of the Palme d’Or; that experience was so profound, being in here in Cannes with that film was indelible,” said the actor, who is filming the British crime drama “Peaky Blinders.” “I spend a lot of time in the South of France, I was close by this year, but I’m very happy to be here.”

Pausing at the top of the steps to pose with Almodóvar and their fellow jury members, Will Smith and Jessica Chastain — respectively clad in a Brioni suit and an Alexander McQueen embroidered dress and Piaget baubles — entertained the crowds by bopping to Kool & the Gang’s, “Get Down On It.”

Channeling old-school glamor, meanwhile, the night’s mistress of ceremonies, Monica Bellucci swept on stage in a custom navy and black pleated tulle gown by Christian Dior Haute Couture to deliver a poetic speech geared around Cannes being a festival without borders, and saluting this year’s female-strong lineup. “Here, each voice deserves to be listened to, from every country, for cinema does not belong to any territory. Film is nourished by a mix of influences that are both complementary and contradictory in nature. The identity of cinema has neither sex, nor flag, nor border,” said Bellucci, adding: “I cannot hide my joy at the fact that this year’s jury president is a man who loves women.”

Joining her on stage, Almodóvar told the audience that when he sees a film, he “feels like the film belongs to me, and is a part of me, and I use it in my own films.”

“Now that this edition of the Cannes Film Festival is about to begin, all I can say is that I hope that the 19 films in competition will not only leave a mark in my life, but will also fill me and inspire me somehow in the movies that I go on to make,” he added.