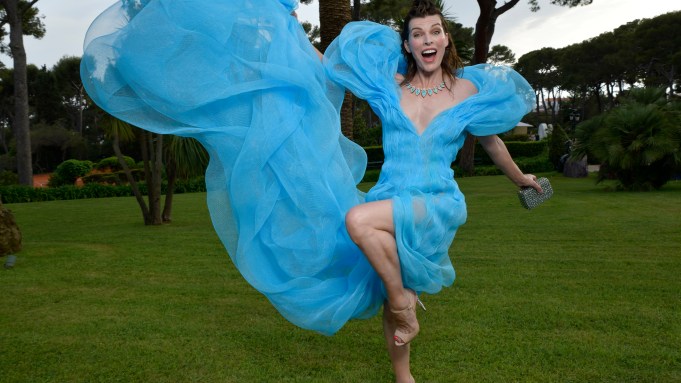 CANNES — The biggest party of them all, the annual amfAR gala, returned to the Hotel du Cap in sumptuous style Thursday night.

Robert De Niro stole the show as the honorary guest, auctioning a painting done by his father, Robert De Niro Sr., titled “View From My Window,” that the senior De Niro pained in rural France in 1963. “I’m happy to be giving away one of my father’s paintings, and I don’t give them away lightly,” he said of the artwork, which eventually went for 500,000 euros.

“It came together really fast,” Erivo said of her Louis Vuitton black and pink mousseline gown. “They know me really well. I arrived yesterday and this was waiting for me. I wanted from go for something very light and summery and it just fit, I just slipped it on and it’s a pleasure to wear.”

Milla Jovovich was wearing a young Ukrainian designer. “She does more pieces of wearable art than dresses, it’s absolutely spectacular as long as nobody steps on my train,” she said, adding, “It’s not only to bring attention, but I felt like it was really important that people see Ukraine isn’t this war-torn country of refugees. There’s art, there’s culture.”

Jovovich was at the event with her daughter Dashiel, who was in rabbit ears. “She designed this herself and put the two together to make her very own headband for the party,” Jovovich said.

Baz Luhrmann, posing for photos with his daughter Lily, said, “Do you want to see my daughter’s shoes?” He lifted up her full-length gown to show Doc Martens and then took a picture of his Prada loafers and her Docs. “More than the applause I loved the energy,” he said of the standing-ovation reception to “Elvis” the previous evening.

Alton Mason, who plays Little Richard in the film, was at the event as well and auctioned a guitar with Luhrmann. He was a voluminous suit from Kaushik Velendra. “I love how he merges masculinity and femininity with his men’s designs,” Mason said. It was his third time attending amfAR. “There’s always a vibe that makes me want to dance. I want to be dancing, elegant, graceful and glamorous.”

Asked if he would get up and dance with Ricky Martin, Mason replied: “If he asks me to!”

Mason wasn’t the only one who promised a Martin moment. Eva Longoria was looking forward to the show. “Um Ricky, hello that’s my other husband. I’m ready to get up on stage and dance. I told him; I already warned him.”

She has spent the week in Cannes and said this year felt electric. “The energy in Cannes this year is off the charts,” she said. “It makes you appreciate it a bit more because coming out of the pandemic and being able to see movies with people and an audience feels amazing. AmfAR is about socializing and connecting the dots with like-minded philanthropic people.”

She took in “Elvis” the night before, and earlier in the week she saw “Top Gun: Maverick,” which she gave rave reviews. “Fan-f–king-tastic,” she exclaimed. “I can’t say better than the original, but that’s what I’m saying. It’s nostalgic and new, it’s reminiscent of the past but a new story. It did everything. It’s a boy movie with the planes and it’s also a romance with a love story. It literally did everything.”

Still neither of them took to the stage when Martin started the evening with an energetic show of “Living la Vida Loca” and “Maria,” where he tossed off his jacket to showcase his moves. Next up was a fashion show, titled “Let’s Get Married” curated by Carine Roitfeld. It featured looks from Chanel, Givenchy, Louis Vuitton, Saint Laurent and Valentino, as well as younger designers Aled Martinez and Nensi Dojaka. Longoria and Jovovich auctioned the dresses after the models walked along a square runway and danced on stage.

“Whoever gets them tonight I’m coming to your house to steal them,” Jovovich said. The collection ultimately sold for 800,000 euros, while a private concert with Andrea Bocelli at his villa in Tuscany went for 1.2 million euros.

Jeff Koons donated his first NFT, titled “Moonphases,” which was made up of one original sculpture which NASA will fly to the moon, one physical replica for the buyer’s house, and one NFT of the sculpture.

“I always enjoyed the idea of creating art to touch in meaning of what it means to be a human being.…I can see my whole history as an artist becoming universal,” he said of the work, which went for 2.1 million euros.

The charity also has jumped on the crypto ship, adding the exchange platform FTX as one of the gala’s official sponsors and accepting digital currency for its auction items.

FTX head of global fashion and luxury partnerships Lauren Remington Platt donated a custom necklace — along with its accompanying NFT — that went for 125,000 euros. The group brought Vanessa Hudgens, Coco Rocha, Law Roach and Casey Affleck to Cannes for the celebration.

Christina Aguilera ended the night with a rousing set of “Beautiful,” “Dirrty,” and “Lady Marmalade” that got Hudgens and Rocha up to dance.