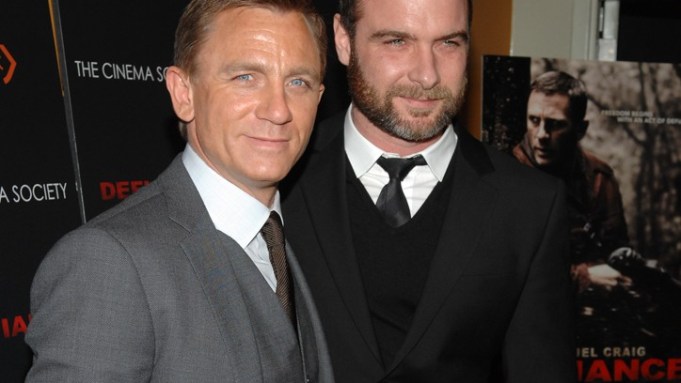 View ALL 29 Photos
While their peers in Los Angeles were recouping from Sunday Night’s Golden Globes, a group of actors in New York, including Liev Schreiber, Daniel Craig, Alexa Davalos and Jamie Bell, had the energy to hit a red carpet on Monday at the Sunshine Landmark Cinema for a screening of their film “Defiance,” which was hosted by the Cinema Society, Nextbook and The New York Observer.

In the movie, three Jewish brothers (played by Craig, Bell, and Schreiber) risk their lives to escape Nazi occupied Poland during World War II. But in real life, the cast confessed to being less than heroic.

Davalos, for one, reported she could barely make it through her audition for the project.

“I could actually see my heart beating through my dress,” said the British starlet.

Bell could relate. “If there’s a problem, I duck for cover and run the other way,” said the actor.

Schreiber also copped to being a fraidy-cat, until his wife interrupted him.

“What about getting on stage in front of thousands of people every night?” Naomi Watts asked. “That’s something.”

Even 007 himself admitted to being a wimp. “I actually have stage fright right now on this red carpet,” Craig said.

After credits rolled, revelers braved the cold and headed to Shang in the Thompson LES Hotel.