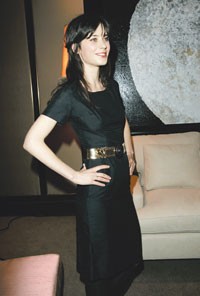 LOS ANGELES — Diamonds apparently are everyone’s best friend — not just a girl’s — as evidenced by the eclectic crowd at last week’s opening fete for Harry Winston’s new Rodeo Drive flagship. A list of luminaries varying from Barbara Davis to Vidal Sassoon to Russell Simmons squeezed through the doors to greet hosts Ronald Winston and Jeffrey Katzenberg. Once ensconced in the Thierry Despont-designed jewel box, they ooohed and ahhhed at all the gems.

“I can barely breathe,” gasped Dita Von Teese, though it wasn’t clear whether that was because of the jewels, the crowd or her signature corseted outfit. Among the first to show up was Eva Longoria, who seemed dwarfed by the giant display cases. Emmy Rossum made sure to get away from the set of her upcoming film “Poseidon” to attend. “I’m a loyal Winston fan, so even though I’m tired from work, I’m here,” she said. Simmons couldn’t take a step forward without being stopped by a socialite or a mogul pitching him something — one even gave him a couple of “spiritual books.” Only in L.A.