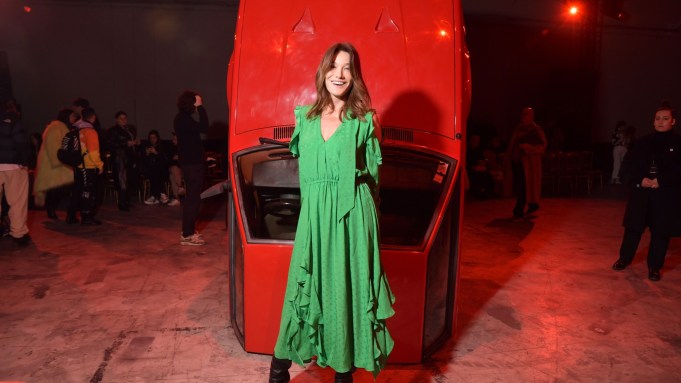 The former French first lady is about to start recording an album of songs she has written. “I always make the same songs really, I wish I could change my style and become a rapper,” she said. “I should chat to Tyga.”

Taking in the set — made up of Eighties-era cars cut in half and upended or placed on their sides — she admitted that it would be a shame to chop up her favorite car, a convertible Jaguar. “Especially not if we were in it,” she laughed.

The rapper’s vehicle of choice would also not take kindly to chopping up. “My go-to day-to-day is a Rolls-Royce,” he said.

Lachlan Watson’s coveted car may be less valuable, but is no less cherished. “I would not want to cut my little 2012 RAV4 in half and stick it on a concrete slab, even for the art, I don’t know if I could make that sacrifice,” said the actor, who has just wrapped the new season of the “Chilling Adventures of Sabrina.”

Sita Abellan had less of a dilemma — she does not yet have her driving license.

The model, influencer and DJ will be releasing music of her own in the summer, she said. “It’s going to be very interesting for people I think, because they don’t expect what I’m going to launch.”