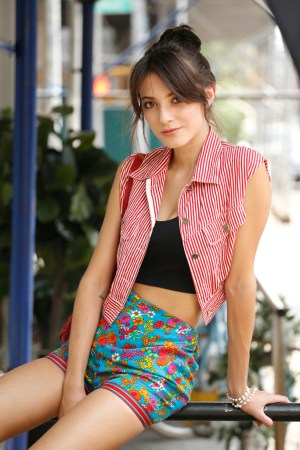 “Anything can happen here, Frank Sinatra-style,” Carla Quevedo says as she looks out onto the SoHo sidewalk lining The Butcher’s Daughter in downtown Manhattan.

The 27-year-old Argentine actress is living the much-hyped, often unrealized New York moment: years of endless auditions and then, one day, a call from HBO. That day marked her casting in “Show Me a Hero,” the miniseries coming to the network Aug. 16 from director Paul Haggis. The show — also starring Oscar Isaac, Winona Ryder and Catherine Keener — paints the sociopolitical climate of 1960s, Civil Rights Movement America. It focuses on a small town transitioning after a court order enforces the installment of low-income housing in the predominantly white neighborhood.

For Quevedo, it is very much her big break.

“I’ve been here five years now, and it’s been the same Catch-22 — until you’ve done something, no one will hire you, but then how am I supposed to do something if no one will give me my first opportunity?” Quevedo says, her legs tucked under her as she sips on a tangerine and carrot juice. She is animated, bubbly and adorably goofy: her arms are dotted in whimsical tattoos, including an ever-so-dainty outline of a chicken nugget — “it makes me laugh” — and an inking that can only be described as “a mountain of kittens.”

Quevedo found her way to New York after her debut ended up being in an Academy Award-winning film. Her first movie role was as Liliana Coloto in 2009’s Argentine drama “The Secret in Their Eyes”; it went on to win the Oscar for Best Foreign Language Film. After the victory, “People told me, ‘If you’ve ever dreamed of working in the United States, this is your moment’,” Quevedo recalls. “So I came here, I got an agent and I stayed.”

The perseverance paid off, and she now sits on the brink of a successful career in America. Following “Hero,” she’ll appear alongside Dakota Johnson, Rebel Wilson and Leslie Mann in the desperately-seeking-love-in-New-York romantic comedy, “How To Be Single.” She plays a character she describes as “the reason why many guys decide to stay single.”

Her role in the HBO series is another thing entirely.

“The show talks about something particular that happened in a particular place, but it’s about racial segregation, and that’s something that still remains. Unfortunately today, all around the world, it’s still happening,” she says. “It’s such good television. It has that universal feeling to it — it’s about relationships, it’s about people, it’s about the way we think and act as a society.”

The series stood out to Quevedo due to the way the producers approached casting. “Every year you see TV shows and movies about this remote thing that happened in this remote place with a minority, and then you have an all-white cast, with all good-looking people. This show is different,” she says.

Aside from acting, Quevedo moonlights as a swimwear designer, a side gig she does with her best friend, Fab Silberstein. “My first job in the industry was actually as a wardrobe assistant,” she says. “I wanted to get myself busy, because with this profession, you have three months that are really intense and then you’re sitting in bed for two months. I’d go crazy.”

The line, La Belle Rebelle, is designed by the duo, and Quevedo is her own best customer: “I’ll wear them with high-waisted pants or shorts” when not on the beach, she says.

Back on the streets of Manhattan, Quevedo is busy soaking in the HBO glory, all the sweeter after those years of never-ending auditioning. “I came to the point where I was like, ‘Geez, I’ll just change my name to Carla De Niro’,” she grins. “It is a profession where you face rejection every day — you have to distance yourself from it. You get 100 ‘no’s’ for one ‘yes’ that makes it worth it.”