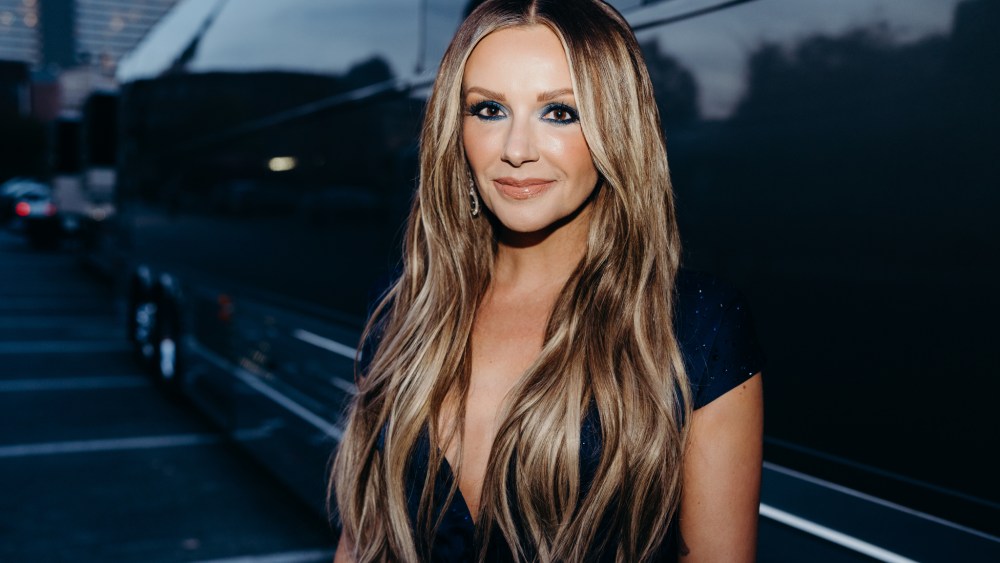 Carly Pearce was so overcome with emotions Wednesday night after winning Female Vocalist of the Year at the Country Music Association awards she could barely speak. After a little help from her friend and fellow nominee, Ashley McBryde, who ran up on stage to steady her, Pearce tearfully choked out: “Country music saved me at a time that I needed it most. This is all I’ve ever wanted.”

The win capped off a whirlwind year for the 31-year-old artist who has experienced a lifetime’s worth of highs and lows in both her personal and professional life over the past two years. Those emotions came spilling out in her third studio album, “29,” which was nominated as Album of the Year by the CMA and led to her nod as the top female vocalist this year.

Initially seven tracks, the EP was expanded to 15 cuts in September and put out as “29: Written in Stone,”which is also the name of her headlining tour, which kicked off on Nov. 4.

“’29’ was started in such a raw, immediate moment, and it captures that shell-shock, that will to survive and get through it intact,” Pearce said. “But as you go through grief, understanding what happened, you start to realize what’s important, how things go wrong, how you have to take care of yourself. Having fans tell me they were so glad I didn’t shy away from the hard stuff, I realized they deserved the whole story, the fact that it will get better.”

And for Pearce, it did get better. “29: Written in Stone” debuted at the top of the iTunes Country Charts and was named a top release of the week by NPR, the New York Times, Billboard and others.

Since she launched her career, Pearce has tackled some highly personal subjects, including the death of her longtime producer and close friend Busbee, who passed away at the age of 43 from glioblastoma, as well her high-profile yet brief marriage to fellow country singer Michael Ray, which ended after 11 months. She wrote “Show Me Around” as a tribute to Busbee, a song that talks about how she’ll be looking for him to show her heaven when she joins him there someday. And the references to love lost are rampant throughout the album on cuts such as “What He Didn’t Do,” “Should’ve Known Better” and the title track, which lays out that she was 29 the year she got both married and divorced.

“I’ve definitely built my brand on being authentic, real and honest,” she said. “I just didn’t realize how honest until this album. But I don’t know how not to be myself: the good, the bad and the ugly, and make music based on the stories of my life.”

She continued: “Messy, unexpected, life happens to a lot of people. Not everyone wants to talk about it, maybe they’re ashamed or feel like they failed. But since 29 came out, so many people have shared their stories with me and hearing these songs made them feel like they weren’t the only one. That’s what I always loved about country music, even the stuff I wouldn’t dare tell somebody else; there was always a song with what I was feeling, too.”

But there’s a lot more to Pearce than just heartbreak. The singer notched her second number-one single in late 2019, a duet with Lee Brice called “I Hope You’re Happy Now”; she was invited by her childhood hero Dolly Parton — Pearce started her career singing at Dollywood at 16 — to join the Grand Ole Opry, and her hometown of Taylor Mill, Ky., awarded her the key to the city and her own street sign. (It was stolen a week later, but that’s fodder for the next album.) And her newest single, “Never Wanted to be That Girl,” a duet she cowrote and sang with McBryde, is rapidly climbing the charts. The two performed the quintessential country cheating song on the CMAs on Wednesday night.

“It’s been a little crazy,” Pearce admitted, “but with a lot of hard things have come a lot of amazing things.”

Pearce’s dazzling trademark smile returned when she saw she was nominated in not one, but two, categories this year.

“I’ve dreamt of being part of the CMAs my entire life,” she said. “And being the only female nominated in the Album of the Year category was even more special.”

Despite her success, Pearce still feels the same as she did growing up in that small Kentucky town. “I don’t see anything different in me than anyone else,” she said, “except I have a microphone.”

As Pearce’s star rose, so did her style. Early on in her career, she opted for Western-inspired bohemian looks, but now, she’s embraced designer clothes. “There’s always going to be a Western element to my everyday looks,” she said, “but in the last year or so, I’ve really elevated my style for red carpet and performances to a level I never thought I would get to.”

But Pearce is enjoying her new fashion persona.

“Fashion is a really fun way for me to express myself,” she said.

For the red-carpet entrance at the CMAs, she wore a navy Marchesa gown with a hint of a midriff and a whole lot of leg showing. And for her performance with McBryde, who wore black sequined pants and a silk top, Pearce opted for an off-the-shoulder pleated white Maria Lucia Hohan dress with a slit.

“It’s the first time I’m wearing Marchesa,” she said. “And then for the performance, the dress has a Renaissance vibe with a corset, but it’s very flowy and elegant. The contrast to what Ashley wore was interesting.”

In general, Pearce said she tends to opt for pieces that are “classy and understated, rather than glitzy — like my music.” But the 5 foot, 8 inch singer isn’t shy about showing off a little leg: “I gravitate toward a slit,” she said with a laugh.

To select her CMA looks, she worked with Los Angeles-based stylist Anita Patrickson of The Wall Group, who had started dressing her earlier this year for the Academy of Country Music Awards where she rocked a hot pink Monique Lhuillier gown (with a slit) and matching stilettos. Patrickson, a former editor for Allure Magazine, also works with Julianne Hough, Camila Alves and Anna Paquin.

So what’s next for Pearce as she looks to 2022? “We just announced that we’re going on the road with Kenny Chesney all of next year,” she said of the rescheduled arena tour that also includes Dan + Shay and Old Dominion. “I’m so happy to be touring again. And beyond that, I’d just like to have another year like I just had.”