“Sometimes I feel like there’s a skin to the play that you’re directing,” says theater director Carrie Cracknell one morning over breakfast at her hotel in SoHo. “And you’re trying to get in, get your shoulder inside it; like inside the beast.”

Permeable boundaries are a driving force of her production “Sea Wall/A Life,” which scaled up to Broadway for a limited run starting Aug. 8, following its premiere at the Public Theater earlier this spring. The production is comprised of two short, one-man plays by two different playwrights staged back to back. Tom Sturridge takes the stage first for Simon Stephens’ “Sea Wall,” and Jake Gyllenhaal follows up after intermission with Nick Payne’s “A Life.”

The act of linking all the various players is a Venn diagram of theater overlap: There was only one or two degrees of separation between the four men and Cracknell.

Cracknell, who is 39, had directed a production of Stephens’ “A Doll’s House” and cowritten a few projects with the playwright; Sturridge had worked with Stephens several times before. Sturridge and Gyllenhaal had costarred in the Netflix film “Velvet Buzzsaw.” Gyllenhaal, already in conversation with Payne about an earlier version of his one-man play for several years, had reached out to Cracknell about working together after seeing her direction of Payne’s “Blurred Lines” at the National Theatre in London.

Two plays, two marquee leading actors. “We suddenly had the idea that it could become an evening of theater if it was the two pieces put together,” says Cracknell.

A former associate director of the Young Vic and The Royal Court theaters in London, Cracknell is drawn toward directing plays about women and gender, and found the plays by Stephens and Payne interesting — and radical — in how they depict masculinity. Both plays are rooted in an exploration of becoming a parent and loss; the two characters grapple with different strains of tragedy.

“There’s a lot of honesty and rawness and frailty, and I was really surprised to see pieces where men talk so openly about parenting,” says Cracknell. “Because one of the big battles for me as a woman with children and working is often people will ask me about my kids. They’ll be really surprised I have children in a way that never happens with my partner.”

The show is more than an opportunity to ogle two actors confronting the challenge of performing an extended monologue in a minimalist stage setting. Cracknell — and her two stars — approach the show as an exercise in connection and radical conversation in the theater. They’re aiming for no degrees of separation between cast and audience. At the end of the play, Sturridge joins Gyllenhaal onstage as a projection of an apartment building zooms out to reveal window after window. Each window represents an individual story. “These two men could be living next door to each other and never know,” says Cracknell of the two characters.

“We talked a lot about when Jake, I think it was his uncle had died, and his dad left from the house to go to get Chinese food for everybody,” says Cracknell. “And when he walked through the door, someone smashed into him and he was really upset. They were talking about the fact that they didn’t know what that guy’s story was; that idea that humanity kind of jostles next to each other. And I found that really moving as an idea.”

The production attempts to break down the barriers to those stories by chipping away at the fourth wall. “We’ve been really interested from the beginning in this idea of we’re all together,” says Cracknell. Gyllenhaal might break character and hand you a tissue if you’re crying, and if you’re sitting close enough to stage, you might have to make room for him as he cuts across the row. Sturridge kicks off the show by walking onstage through the theater while people are still filing in; he opens a beer while waiting for everyone to settle in. Cracknell sees these moments as a way to shatter the divine and set the tone with the audience.

The play has further broken down the usual boundaries between actor and fan. It’s one thing to experiment with those divisions inside the theater, but the production continues to engage outside it as well. Both actors spend time at the stage door talking with people at the end of performances, which is especially notable when considering the players involved; Gyllenhaal is a particularly private actor.

“It was really important to both of them that they do connect with the audiences,” says Cracknell. “Often in the show I feel an unbelievable amount of personal histories coming into the room. And so I think they both feel it would be dishonest to not live in that and allow that.”

They took that concept — of the audience being seen, and stories existing alongside each other — a step further through a public art collaboration with street artist JR, who Gyllenhaal has known for several years. Portraits of the cast, crew, their friends, and audience members from the first performance — photos were taken “democratically” in the foyer following the show — are wheatpasted on the exterior of the Hudson Theatre. The result mirrors that of the show’s final projection.

For her next project, Cracknell is working on preproduction for a movie she hopes to film next year in London. Reticent to share too much about the project, she does offer that it’s an immigrant story based on a memoir dealing with female self-discovery and creativity. As for the show of paired plays, its future after Broadway is in flux; Cracknell notes that it hinges on Sturridge’s and Gyllenhaal’s availability. “At the moment it feels it couldn’t ever have other actors,” she says. 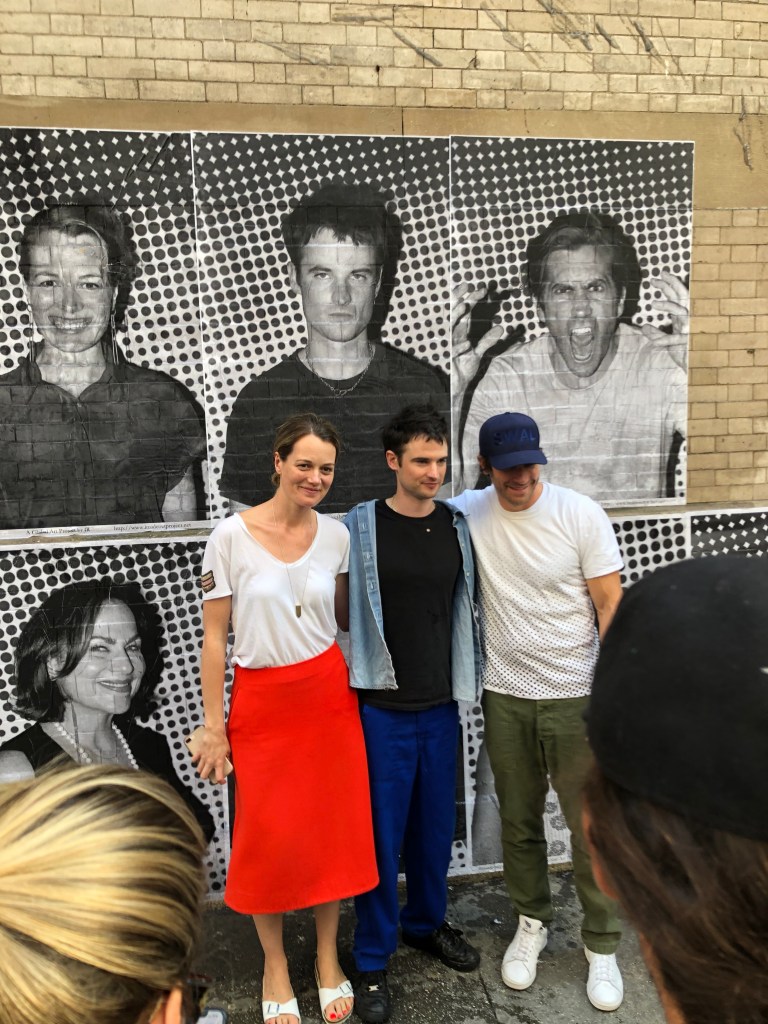