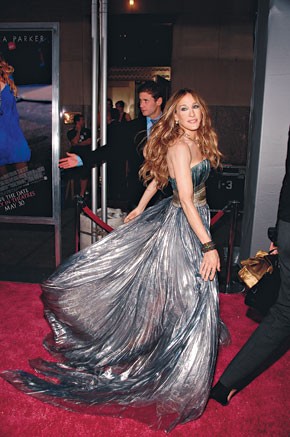 If New York really is the fifth character in “Sex and the City,” it was only fitting that Gotham played a starring role at Carrie and coterie’s Stateside premiere on Tuesday. The mere anticipation resulted in a massive traffic jam outside Radio City Music Hall as hundreds of gung-ho groupies (mostly female, many in groups of four) braved a midafternoon monsoon in the hopes of catching a glimpse of the film’s stars, Sarah Jessica Parker, Cynthia Nixon, Kim Cattrall and Kristin Davis.

It was a little much for even the seasoned cast. “I’m dying out here,” declared Lewis before making a beeline into the theater.

Parker, however, gamely worked the sparkly pink carpet for nearly an hour — though her long-trained Nina Ricci number seemed to suffer. “I am going to get on my hands and knees tomorrow morning and darn every hole before I return it,” she said. “I’m just glad I got this dress before Carrie did.”

Afterward, Parker and her cohorts hit the MoMA for an after party, where organizers — dare we say it — got carried away. “Show of hands — who wants a cosmo?” asked a bartender to a crowd full of partygoers with raised hands.

Indeed, many of the guests fancied themselves as one of the film’s famous quartet. Fergie — who sings on the soundtrack — said she’s a Samantha whose outfit was channeling Carrie; Jennifer Hudson characterized herself as a Carrie with “a tinge of Samantha;” Molly Sims was a Carrie-Charlotte hybrid with a little Miranda thrown in for good measure (“because I make lists”), and Rodriguez, a plain and simple Carrie.

But Pat Field was over-“Sexed.” “I can’t answer another stupid question,” the costume designer pleaded. “It’s bulls–t. Don’t ask me about the latest trend.”

By midnight, Parker and her husband, Matthew Broderick, had decamped to The Carlyle, where the rest of the cast and crew joined them for drinks until nearly 3 a.m.

“SEX AND THE CITY” PHOTOS BY STEVE EICHNER