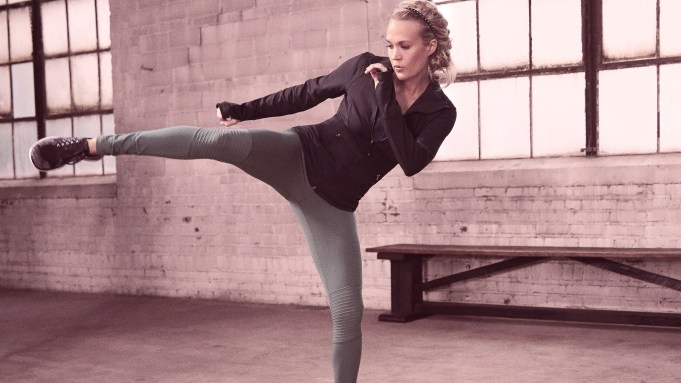 Carrie Underwood is used to sitting in the front row at fashion shows. But this September, she’s going to be front and center at her own presentation.

This spring, the country music singer, seven-time Grammy winner and “American Idol” alum, partnered with Dick’s Sporting Goods on Calia by Carrie Underwood, a fitness and lifestyle apparel line that is being sold exclusively at the sporting goods retailer.

Next month, Underwood will host an “activation” at The HQ, a new venue at 451 West 14th Street that will be used for New York Fashion Week events. Underwood will present her fall collection on Sept. 10 at the location in a glorified pop-up, where invitees will be able to shop the line immediately.

In addition, the Fashion Week initiative will include partnerships with bloggers and media outlets and the venue will be open to the public every day between 2 and 4 p.m. where all shows from the official venues — Skylight Clarkson Sq and Skylight at Moynihan Station — will be live-streamed throughout the day.

“I’ve been a spectator at Fashion Week a few times,” the entertainer said, “but this is the first time I’ll be involved.” She said that as a spectator, she’s often frustrated that she has to wait six months before she can buy the merchandise she sees on the runway. “I sit in the audience and say, ‘Oh, I love that,’ but then realize, ‘Oh, I have to wait.’ But with this, people can see what we’re working on right now and buy it immediately. I love that and I hope they will, too.”

Underwood, who will select the soundtrack for the presentation, also will use the opportunity to make an announcement about the collection. Although she said she needs to keep the details under wrap until then, it’s not much of a leap to assume she’s going to announce an extension of the line, which features fitness apparel with functional and performance details in feminine designs.

Underwood, who is married to Nashville Predators hockey player Mike Fisher and is a new mom, said she’s intimately involved in the design of the collection. “We meet all the time, look at swatches, colors, styles. I raid my closet, look at pictures of my friends, anything for ideas.”

She said among her favorite pieces are the sweaters, which are “supercomfy and easy to pull on,” along with the layering pieces. “And we also have some really great printed tights in rich colors that are very warm.” The line is also offering a new fabric technology called Bodywarm, which is designed to guard against cold and retain body heat. The line features capris and pants with average retail prices of $60 to $85 and tops that average $30 to $35.

Although Underwood said she’s “not one to ask about numbers,” she said the line appears to be doing well since its launch in March. “From what I see on social media and my fans wearing things, it looks like it’s dong what we want it to do: bridge the gap between functional workout clothes and something you can wear everyday.”

She said a line like Calia is a “real time-saver for me as a new mom. It can take me from one part of my day to the next and I can still look pretty.”

Looking pretty is not a stretch for the singer, whose girl-next-door looks and killer legs have helped catapult her to superstar status — along with her vocal range. Just four months after her son Isaiah was born, Underwood appeared on the CMT Awards looking as fit and toned as ever.

Underwood said breastfeeding helped her drop the baby weight along with her healthy lifestyle. “I worked out up until the day before I gave birth,” she said, “and food was a big part of it. I try to make healthy food choices and stay active.”

Since the baby was born six months ago, she said “workouts happen if and when they can.” And they range from running — “I love to run but I’ve never done any long distances,” she said — and weightlifting to boxing. “And I haven’t done it in a while, but I also like hot yoga,” she said. “I’m really up for anything. I like to switch it up.” That includes taking her son to the park in a covered stroller, a way to bond and get some exercise.

She said she enjoys dressing up for public appearances since it allows her to showcase another side of her personality. “I’m like any other woman,” she said. “There are a lot of layers to us. I like dressing up to go out for a date night or for a glam red carpet. That’s Carrie Underwood, where I can wear a fabulous designer dress — that I borrowed — and wear diamonds — that I borrowed. But she’s different from Carrie; that’s who I am at home when I wear Calia stuff to go to the supermarket, take my son to the doctor or go for a walk in the park.”

This fall, there’s not going to be as much home time as she might like. In addition to her NYFW appearance, Underwood has a new album coming out on Oct. 23. “We had a greatest hits package with a couple of new songs on it, but this is the first studio album in three and a half years,” she said. “We’ve been working on it a long time, and a lot of love went into it. It’s time.”

The first single, “Smoke Break,” was delivered to country radio on Monday and the video was teased on Underwood’s social media platforms and on etonline.com the same day. The song, which she cowrote with Hillary Lindsey and Chris DeStefano, tells the story of a hardworking woman looking for some alone time. “We all wear many hats and are spread thin, so we can all relate to being tired and needing a break,” Underwood said. “This song is about having that moment to be able to escape from whatever it is that’s stressing you out and have some time for yourself.”

She said “Smoke Break” is a “good representation of the album as a whole.”

The song made history by earning the highest one-week add total in the history of trade publication Country Aircheck, according to her record company, Sony Music.

With the promotion for the album and Calia, Underwood won’t have a lot of down time in the future, but she’s OK with that. “I’m going to be a busy lady this fall,” she said with a laugh.