Becca Cason Thrash raised money during a charity auction for the American Friends of the Louvre at the Four Seasons Hotel on Tuesday night. 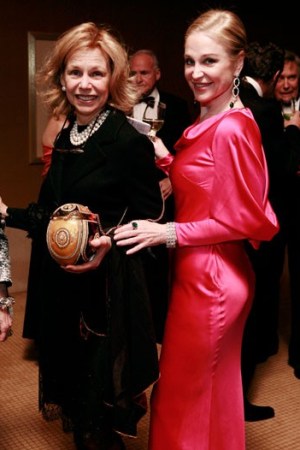 Auctions are the new black — at least half of this week’s social events included live bidding on lots ranging from art to travel.

Becca Cason Thrash raised money at the Four Seasons Hotel on Tuesday night to aid the American Friends of the Louvre, and proved that when calling an auction it helps to know your audience — and their personal net worths.

“Suzanne, this [costs as much] as just the post of your earring,” Thrash said, urging her friend Suzanne Saperstein to bid on a trip to Dubai.

Thrash brought in $109,000 for only three lots, including a trip to Doha to visit the Museum of Islamic Art designed by I.M. Pei. The architect was being celebrated in honor of the 20th anniversary of his pyramid at the Louvre.

“Ever since coming to the United States, I always dreamed of going to Paris to see the Louvre,” said the 92-year-old. “Folies Bergère came second.”