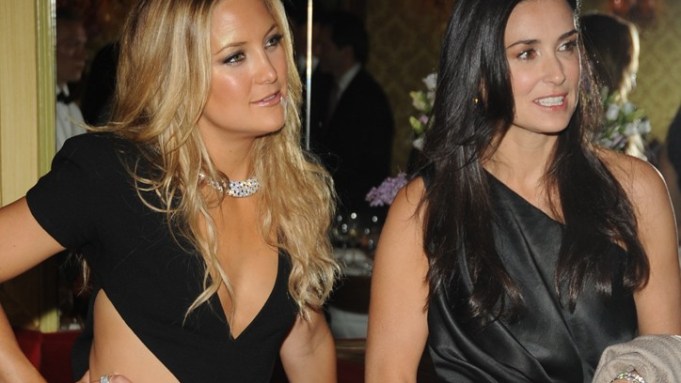 The “TAJ MAHAL” necklace Richard Burton famously gave to Elizabeth Taylor. A blinged-out watch owned by Elton John. And Steve Wynn’s 231-carat diamond that was heavy enough to sink a small ship. All were on display Thursday night in honor of Cartier’s 100 years in America, at a party in New York attended by more celebrities than the Golden Globes.

Rachel Weisz, Demi Moore, Jessica Biel, Justin Timberlake and Anne Hathaway were just some of the stars craning their necks to get a peek at the various baubles on show in the Fifth Avenue store. Even Patti Smith showed up. “It’s not as strange as you might think,” said America’s most famous punk-rock chick. “When I first signed with Clive Davis, my manager Jane Friedman gave me a Cartier watch. They sponsored my art exhibit and my small film. And they gave me this beautiful watch.”

Some people weren’t so sure about the Wynn diamond (“It’s so big, you almost assume it’s costume jewelry,” laughed one guest), but not Kate Hudson. She walked right up to the case and began caressing it. Then she took a picture with her BlackBerry. “I’m going to send it to my mom,” she said.

Hathaway said she wouldn’t have dared miss the event. “I have a relationship with Cartier,” she said. “They lent me my Oscar jewels.”

After cocktails, the famous faces walked across 52nd Street — through the throngs of cordoned-off paparazzi — to La Grenouille for an intimate dinner honoring Bruce Weber’s book, “Cartier I Love You.” Eva Mendes made conversation with Timberlake and Biel (though the pair refused to make conversation with any reporters, apparently saving their voices for tonight’s Costume Institute gala, where Timberlake is a co-host), and Ashley Olsen arrived with beau Justin Bartha.

Moore caught up with Hathaway later in the evening. “Thank you for being involved with this tonight,” said Moore, an advocate of ServiceNation, the organization the night benefited.

And while no one wants to be presented with a cake with a “100” candle on it, Weber handled the flaming confection with aplomb. “When Cartier approached me to do this project, I thought they were crazy,” he said. “I don’t use jewelry — I don’t even use clothes [in my pictures].”