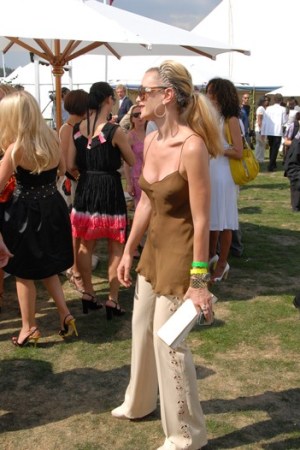 “I grew up with polo, my father and brother are professional players, and she’s dated a few,” explained Jemma Kidd, giving a playful nod to her friend Sarah Woodhead. The chums were guests at the 24th Cartier International Polo on Sunday, the annual event at Windsor Great Park that’s a fixture of the English summer season. Emma Watson, Rosamund Pike, Margo Stilley, Holly and Sam Branson, and Isabella Anstruther-Gough-Calthorpe turned up to squint at the polo players through the afternoon’s searing sunlight. Salman Rushdie came with new companion Aita Ighodaro, a statuesque aspiring writer. Before watching the English and Australian teams duke it out for the Coronation Cup, the glam group dined on lobster and Welsh lamb in Cartier’s tent, decked out for the occasion by designer Nicky Halsam with pink Cartier flags inspired by Jean Cocteau and Elsa Schiaparelli and chandeliers covered in swans’ feathers.

But despite the event’s chic trappings, some newbies were just there to experience a polo match firsthand. “I shall be screaming from the sidelines — if that’s allowed,” said Natalie Imbruglia.

This story first appeared in the July 31, 2008 issue of WWD. Subscribe Today.

It turns out cheering wasn’t the only threat to decorum — three exuberant streakers interrupted the match with a naked dash across the field, in plain view of Prince Charles, who presented the Coronation Cup to the winning English team.

Later, guests retreated to Cartier’s marquee for some respite from the 80-degree weather. “We’re off to get some tea,” proclaimed actress Kelly Brook, who, despite relocating to Los Angeles, still has a penchant for English customs.