Guests at the 24th Cartier International Polo Tournament Sunday at Windsor Great Park turned up to squint at the polo players through the afternoon sunlight. 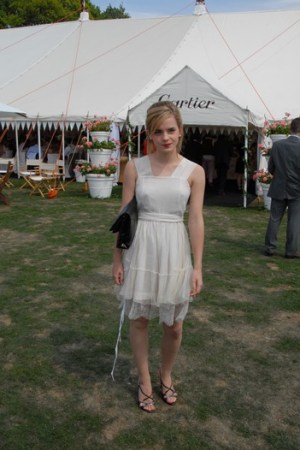 “I grew up with polo – my father and brother are professional players, and she’s dated a few,” said Jemma Kidd, giving a playful nod to her friend Sarah Woodhead. The chums were guests at the 24th Cartier International Polo Tournament Sunday, the annual polo event at Windsor Great Park that’s a fixture of the English summer season.

Ahead of the Coronation Cup, during which the English polo team played Australia’s, the glam crowd dined on lobster and Welsh lamb in Cartier’s marquee. Designer Nicky Haslam had decked the space out with pink Cartier flags inspired by the work of Jean Cocteau and Elsa Schiaparelli and hung up chandeliers covered in swans’ feathers.

But despite the chic trappings of the event, some newbies were just there to experience a polo match first hand. “I shall be screaming from the sidelines – if that’s allowed,” said Imbruglia.

It turns out cheering wasn’t the only threat to decorum –  three exuberant streakers interrupted the match with a naked dash across the field, in plain view of Prince Charles, who presented the Coronation Cup to the winning English team in place of Queen Elizabeth.

Later, guests retreated to Cartier’s marquee for some respite from the 80-degree weather. “We’re off to get some tea,” said actress Kelly Brook, who despite relocating to Los Angeles seems not to have lost her penchant for English customs.