Catching a Glimpse of Michelle Obama 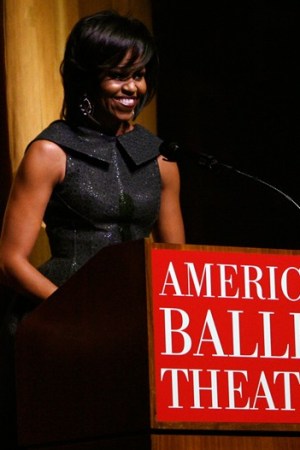 Clearly word of her attendance had spread ahead of time—police barricades held back both paparazzi and civilian snappers. But there was little chance of a stray sighting as the First Lady’s appearance was a finely calibrated dance that left most in the Opera House’s audience guessing. And as for official photos: there was one, taken by a White House-approved photographer and released the next day that showed a wooden Obama standing beside Met dignitaries, or barely discernable amongst a sea of ballet dancers.

“I think she’s in the top box,” said one woman before the evening’s program as guests stood peering upwards, hoping for a glimpse.

It wasn’t until mid-performance, after Balanchine’s “Mozartiana,” that she finally emerged. A red podium was rolled out and honorary chairman Caroline Kennedy took the stage to introduce her.

“Tonight is an evening of many firsts,” began Kennedy, alluding to the First Lady’s presence and also students from the Jacqueline Kennedy Onassis School at ABT who were making their debut at the Met.

When Obama finally walked out, she was greeted with a standing ovation and many a seemingly jaded ballet-goer took out their cellphone cameras to snap photos.

“My husband and I believe strongly that arts education is essential for building innovative thinkers who will be our nation’s leaders for tomorrow,” she said to much applause before returning to her box.

“I think tonight is a wonderful evening for all Americans and young people to support the arts—and to see the children dance is just wonderful, just wonderful,” she said, adding that she and Obama would be missing the gala’s post-performance dinner.

“I love her. I think she’s wonderful,” said Carolina Herrera, who co-sponsored the gala along with Graff.

“It was major! I mean, was there anyone in that room who didn’t think the same?” queried Marjorie Gubelmann.

“It’s always great to see Mrs. Obama speak,” said a somewhat subdued Matthew Modine (it wasn’t an evening of firsts for him: he had already seen her at the DNC and the Inauguration, among other occasions).

“She’s a lot bigger than I thought she was—she made Caroline Kennedy look like a midget,” mused one partygoer.

None seemed to articulate her appeal quite like Lipstick Jungle’s Lindsay Price.

“I was definitely star-struck. I mean, she’s like the coolest person ever right now, isn’t she?” said the actress.