The Bright Young Things at Wilsford, 1927

LONDON — The young Cecil Beaton was desperate to escape his humdrum middle-class background, thrust his sisters Nancy and Baba into society’s whirl, and hang around with aristos, actresses, literary types and socialites. That, he did.

The British tabloids called Beaton and his new friends “the Bright Young Things,” but what the ambitious and talented young photographer didn’t recognize was that he was possibly the brightest one of all, despite the lack of vast family wealth, fancy titles or serious social connections.

Straight out of Cambridge, Beaton surprised himself with his bold moves, sidling up to Sergei Diaghilev, founder of the Ballets Russes, during a trip to Venice and showing the world-famous impresario his portfolio of stage designs, and working his way into the heart of high society by snapping glowing, soft-edged portraits of debutantes and dandies. 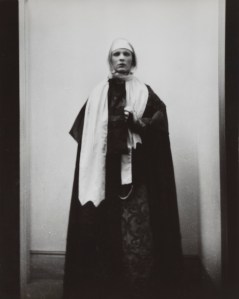 George “Dadie” Rylands as the Duchess of Malfi by Cecil Beaton, 1924.  The Cecil Beaton Studio Archive

A new show at the National Portrait Gallery, “Cecil Beaton’s Bright Young Things,” swings the spotlight on those early years in the artist’s career, with 170 of Beaton’s portraits, paintings and scrapbooks and works by friends such as Rex Whistler. Having opened this week and running until June 7, it will then tour the U.K.

The show looks at Beaton’s early, camp images of family and friends dressed in elaborate costumes against showy backdrops and other, groundbreaking work which drew on references ranging from classical history to English Renaissance theater, 18th-century French painting to 20th-century European Surrealism. 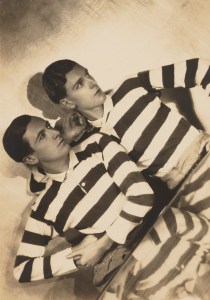 In particular, Beaton loved dressing his subjects as the Duchess of Malfi, the central character of the 17th-century tragedy by John Webster; in Biblical robes, or lavish headdresses. One of Beaton’s early portraits — from 1924 — showing the British scholar George “Dadie” Rylands dressed as the ill-fated duchess, helped him win his first contract with Vogue.

“It’s the age of jazz and modernism, the era of the Bright Young Things and their riotous goings-on — the London-wide treasure hunts, scavenger parties and costume balls. It was also the time of intense creativity in the arts as well, and it’s in this world that Cecil is able to shape himself as an artist,” says Robin Muir, curator of the show.

“He’s wondering what he can do with, and for, this new art of photography, and as importantly, what can it do for him, because Cecil at this age, is nothing if not ambitious.”

Muir argues that Beaton’s early work stood out for a variety of reasons.

“British photography in London during this period was very much to do with the West End salon photographers: You would go and sit in the studio and be quite rigidly posed and photographed. Cecil brought a bit of fresh air with his backdrops — the sequins, cellophane and silver paper. It’s quite unusual,” he says.

It wasn’t only his mother’s fashion magazines that influenced Beaton. “Cecil was very aware, and not just of fashion. He was very attuned to themes going through European art, and he brings a lot from nascent European surrealists,” Muir adds, pointing to Man Ray as a major influence on Beaton’s work.

The show also brings to light Beaton’s endearing — if complex — personality, as well as his very British sense of humor, and self-deprecation. 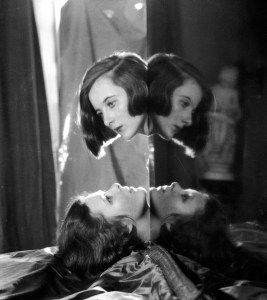 It’s difficult to resist the portraits of the artist dressed as the British romantic novelist Elinor Glyn, or as the painter Thomas Gainsborough. The shot of Beaton dressed in football stripes and hamming it up with his pal, the famously decadent socialite Stephen Tennant, has a distinctly Man Ray-ish feel.

“Cecil, at this point, is not about stripping back the surface in his photography to penetrate the personality inside. It is, in fact, all about the surface. It’s about pretense, an unreal world, make-believe, how he’d like the world to see him rather than, ‘This is the real me,’” Muir says.

The frank and self-aware Beaton was always clear about what was driving him in those early years. “He boldly states in his diaries and his memoirs that he wants fame, success, recognition and all the trappings of celebrity. And these are not dirty words for him. He really wants to be somebody,” says Muir.

Beaton’s work ethic was as ferocious as his ambition. He pivoted to war photography — with great success — working for Britain’s Ministry of Information during World War II, traveling the world and chronicling the damage done by the Blitz at home in London.

Taking on the war assignment was part of Beaton’s effort to rebuild his career, which came to ruin after Vogue fired him for anti-Semitic comments he stupidly made while working for the title in the late Thirties. 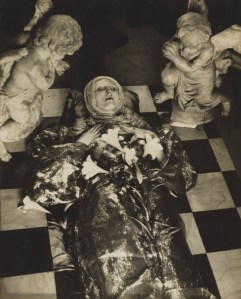 After the war, Beaton would go on to greater heights, snapping portraits of the British royals and international celebrities and designing the costumes for stage and screen productions of “My Fair Lady.” He would eventually win Academy Awards for Best Costume Design both for the 1964 film version of “My Fair Lady,” and for his work on “Gigi.”

Days before his death in 1980 at the age of 76, he was in the thick of negotiations to take the 80th birthday portraits of Queen Elizabeth, the Queen Mother, as he was a lifelong favorite of Britain’s royal family.

Forty years after his death, Beaton’s beat goes on.

This is the third Beaton exhibition that the National Portrait Gallery has staged: A retrospective in 1968 was the institution’s first for a living artist, and the show had to be extended twice because it was so popular. The second was a show of portraits in 2004, marking the 100th anniversary of his birth. 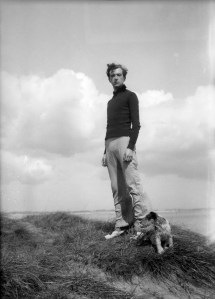 Moralioglu says the show spoke to him “because Cecil Beaton is someone who created who he would become. He wasn’t born into a family of aristocracy, he wasn’t a socialite, he was middle class with a very normal background.”

Hugo Vickers’ authorized biography of the photographer, designer and aesthete has been republished to coincide with the National Portrait Gallery show, while Beaton’s famous and meticulously kept scrapbooks have engendered an Instagram challenge: The National Portrait Gallery is asking followers to create and submit their own portraits inspired by the themes the young Beaton loved, including masquerade, fashion and performance.

“In the celebrity-centric age of Instagram, the marriage of performance, personality and style that Beaton discovered and perfected in his portraits of the Bright Young Things is just as relevant as ever,” says Nicholas Cullinan, the gallery’s director.