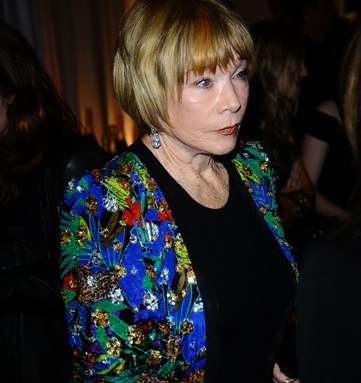 “Aren’t we glad that we aren’t bankers right now?” Jane Fonda asked the power crowd assembled in the ballroom of the Four Seasons Beverly Hills for Elle Magazine’s 15th annual Women in Hollywood dinner Monday night. Indeed, the annual confab of elite actresses and directors — this year’s honorees included Fonda, Halle Berry, Nicole Kidman, Sigourney Weaver, Catherine Hardwicke, Anne Hathaway and Isla Fisher — is always a celebration of the good life in La-La Land. Francisco Costa, who made his first appearance at the event (Calvin Klein was the presenting sponsor), was in an appropriate state of awe, seated between Amber Valletta and Eva Mendes. “This is an amazing night, all these women…,” he sighed.

“It’s an intimidating room,” offered Hathaway, whose tablemates erupted into fits of nervous laughter after Fonda came by to say hello.

Fisher also basked in the shared glory, while fiancé Sacha Baron Cohen recorded her speech on his digital camera and snapped pics of tablemates Courteney Cox and David Arquette. To keep her cool in the room full of legends such as Diane Keaton and Shirley MacLaine, Fisher came armed with a plan. “That’s what Champagne’s for,” she said.

A separate contingent of the fashion flock was downtown at the Banana Republic-sponsored opening of “Live Forever: Elizabeth Peyton,” at the New Museum. Stephanie Seymour, Debbie Harry and Rachel Feinstein milled around the two-floor exhibit, which included oil-paint portraits of Jackie Onassis and John F. Kennedy Jr., Kurt Cobain, Eminem and Marc Jacobs (who arrived at the museum with boyfriend Lorenzo Martone). “He’s the best sitter,” said Elizabeth Peyton of the designer, who had dressed her for the occasion in a spring look from his New York runway. “He always falls asleep.”