Uma Thurman, Alexis Bledel and Nina Dobrev were among those who attended the organization's spring gala. 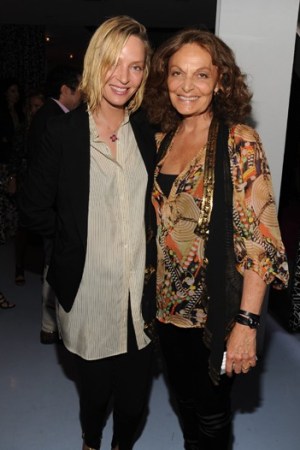 A mix of film and fashion people flocked to the Meatpacking District Wednesday night for the Independent Filmmaker Project Spring Gala, for which Tatiana von Furstenberg served as honorary creative chair. That explained the venue: The DVF Studio, which has doubled as a function hall for hire lately. “Tonight is my daughter, tomorrow night it’s my son,” said Diane von Furstenberg, referring to Thursday night’s American Art Award Gala where her son Alex was the honoree. “I’m being a good mother.” But for the moment the focus was on finding a way for independent films, which require “being really resourceful,” said Tatiana, whose feature “Tanner Hall” is due in theaters in August. “We used our own clothes.”

For every big name — Ed Burns, Uma Thurman, Blythe Danner — in the house there was a hard-to-place independent — Zoe Lister-Jones, Caitlin Fitzgerald and Esti Ginzburg — which made for some interesting “should-I-know-you?” moments between the aspiring actors and fashion folk like Yigal Azrouël and Olivier Zahm.

Patricia Clarkson, Mamie Gummer and Amber Tamblyn all seemed to have gotten a fuchsia dress-code memo, not that Tamblyn noticed as she was too busy ogling her outfit’s designer, von Furstenberg.

“She’s one of my favorite designers,” said Tamblyn, who just wrapped Danny Boyle’s “127 Hours” with James Franco in Utah. “I’m wandering around like a little puppy trying to get a bone, which is Diane von Furstenberg.”