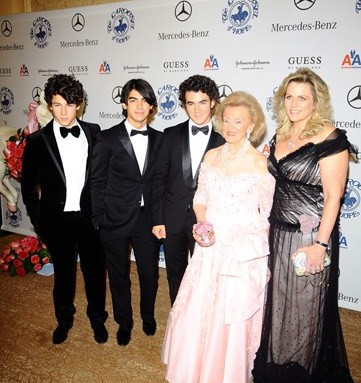 Even in a recession, Hollywood knows how to keep giving. Los Angeles grande dame Barbara Davis hosted the 30th Anniversary Carousel of Hope Ball Saturday night at the Beverly Hilton, drawing a loyal cadre of Hollywood stars such as Joan and Jackie Collins, Burt Bacharach, Neal Sedaka, Bo Derek, Geena Davis and the evening’s honorees, Denzel and Pauletta Washington. But Davis (dressed in a signature pink couture gown by Murad) doesn’t forget the kids: headlining the evening’s performances were The Jonas Brothers.

“Now tell me, how old is everybody?” Davis asked them.

Upon hearing that they are all under 21, she asked, “So who here wants to get married?”

Even during a night of raising money for childhood diabetes, Davis couldn’t contain her grandmotherly instincts.