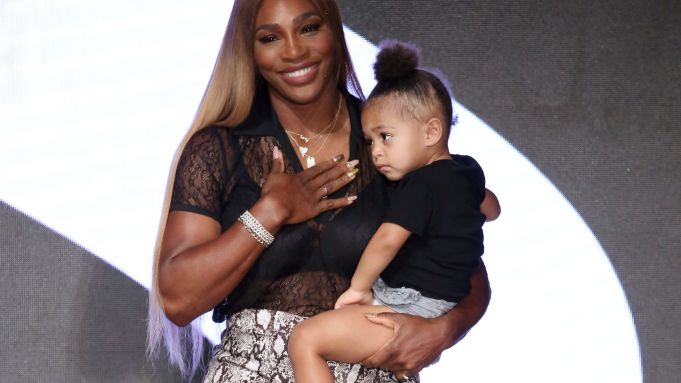 Tennis pro, entrepreneur and mother all apply to Serena Williams, but Tuesday afternoon she was all about fashion.

Before staging her first runway show as an independent designer, the 23-time Grand Slam champion spoke about dealing with the daily demands of her multihyphenated life. As models and the production team swirled around backstage got everything in order, Williams talked about her professional and personal agility. “It’s so easy for me actually to switch gears. I love being creative, because it almost relaxes me. My job is a little stressful, so this is a whole different side that I enjoy,” she said at the Klarna Style360 venue.

The tennis ace’s husband Alexis Ohanian, cofounder of Reddit, mingled with guests like former NBAer Rick Fox before the lights went down. While some fashion followers mused about Meghan Markle making a surprise appearance, it was Kim Kardashian West who sent the pack of photographers into an absolute frenzy. Wearing a shimmery silver tank top, Kardashian was hard to miss with her BFF Jonathan Cheban and La La Anthony. Dapper Dan also dropped by.

Williams did not need reminding that staging a runway show less than 72 hours after the U.S. Open women’s finals was a lot back-to-back. (Nor was there mention of how 19-year-old Canadian Bianca Andreescu’s upset win short-circuited her attempt to secure her 24th major win.) Needless to say, her fashion week responsibilities are always on her mind. “I’m sending messages and e-mails every day about graphic designs, different models, hair and makeup, styling and fittings. It’s what I’ve gotten used to,” she said.

Unlike the HSN-backed show she held in September 2015, Tuesday’s event was the first that she handled for S by Serena. Williams’ HSN collection debuted in 2009 and wrapped up in September 2017. She then ventured out on her own. “This is a huge moment for me. I did a show with HSN before and I was so nervous for that. I’m glad it happened, because I’m so chill. If this was my first time, I would not be able to talk to you right now. I would be like, ‘OK, are the models dressed? Put on your look.’ But [today] I’m like, ‘OK, we’ve done this before.’ It’s more relaxing now.”

The second time around, however, carries with it a greater responsibility. “I do feel a greater responsibility but I actually like that more. I have way more control than we did before. So I control every single thing that’s going down that runway. I look at every single piece and make sure that it’s great,” Williams said. “Working with my designer and myself, we just come up with this great look and this great line. I love designing it. It’s super cool.”

A few of the finale looks, including striped velvet ones — in wide-legged pants, a tank and blazer or a bodysuit with an open-back — were among her favorites from the fall collection. Shoppers can find the runway looks online. “Also, I love our iconic S logo and the plaid [which was featured in a loose-fitting coat, among other silhouettes].”

While some designers are inspired by their last vacation or a newly discovered artist, Williams eyes a bigger picture. “Just reaching bigger and better goals, and having a daughter, always inspires me to do more. I want to show up for her. There are things I never thought about. I have always represented women, but having a daughter makes me want to do it even more,” she said affirmatively.

To that end, after the show Williams took her final bow holding her toddler daughter. Other signs of positivity could be seen in the casting, which featured 18 models of different sizes and ethnicities. There were also overt signs of the Be Seen Be Heard collection in a runway print and also decor, which highlighted such words as “spectacular, smart, swag and strong.”

As for whether it is too soon to talk about the tennis pro-designer’s legacy, Williams said, “It’s never too soon.” After the show, a few in the crowd said they are still gunning for the Nike-sponsored athlete to keep swinging for her 24th major title. Waiting near the entrance for the backstage parade to thin out, Fox said he was excited on two levels — his first experience at New York Fashion Week and “seeing Serena evolve outside of what she has been great at for so many years, and start to take on a leadership role in fashion.”

Aside from sharing the same WME agent with Williams, Jill Smoller, Fox had added incentive to attend the show: His daughter Sasha walked on the runway.

Inside the Serena by Serena Williams RTW Fall 2019 Collection