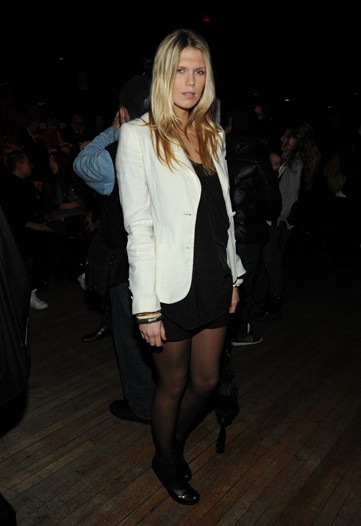 Just a cursory look at some of the names taped to seats at shows this week — Kravitz, Collins, Hemingway, McEnroe — and you’d think the collections were attracting some major star wattage. But that seat marked “Richards” at Alexander Wang didn’t belong to a Rolling Stones guitarist in the market for a pair of black biker shorts. Instead, it was reserved for one of Keith Richards’ daughters, Alexandra, and elsewhere around town, other offspring have been generating flashbulbs at every turn. (Yes, celebrity sightings have come to this.)

Of course, PYTs with pedigree have been on hand for New York Fashion Week before — the Traina sisters have been style-circuit regulars for years, as have the Richards sisters and ditto Zoë Kravitz. But with television and film actresses either off working or getting prepped for the Academy Awards on Sunday, there’s now more room on step-and-repeats this week. So the children of the famous are becoming even more famous.

For some, this newfound exposure has been a way to branch out from the family name. “Fashion is more my thing,” said Lily Collins, one of this week’s ubiquitors, before she took her seat at Hervé Léger on Sunday morning. “My dad [Phil] is more about comfort.”

For others, though, it’s a way of carrying on family traditions. “My dad used to embarrass me all the time with his clothes when I was younger,” said Kravitz, daughter of rocker Lenny, who was spotted front row at Erin Fetherston wearing a bejeweled headband. “But now I wear crazy outfits sometimes, too.”