Guests at Chanel Share Their Favorite Memories of Karl Lagerfeld

By Joelle Diderich and Katya Foreman on March 5, 2019
View Slideshow 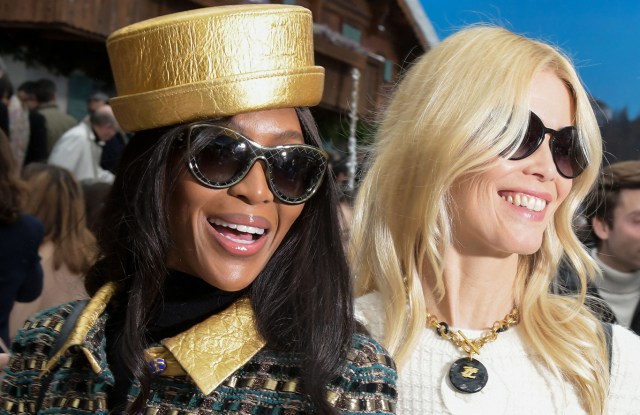 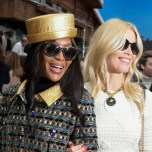 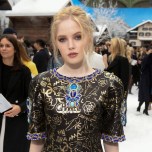 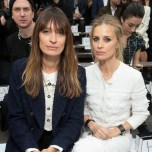 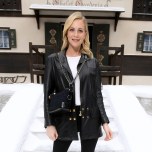 No one coughed. It felt like no one even breathed.

Karl Lagerfeld’s last show for Chanel opened with a moment of silence, and the vast Grand Palais was as hushed as the mountain village depicted in the set, rows of wooden chalets, their chimneys smoking, set among pine trees and mounds of fake snow.

Lagerfeld loved snow — he would rush out to take photos whenever it dusted Paris — and his finale looks were white “snowball” sweater dresses with fluffy skirts, the first modeled by Penélope Cruz, who strolled out smiling and twirling a flower.

“I felt like laughing and crying at the same time, to see all these people that loved him so much celebrating him together. But seeing all this, also it’s the beginning of something else, all that he’s created over all these years,” Cruz said.

“The collection I saw today gave me goosebumps because everything is there: the past, present and future. I loved that they took the time at the beginning of the show, that they asked for that minute of silence. It made everybody stop and breathe, then there was the right kind of energy for the show,” she added.

Mariacarla Boscono could not hold back tears during the finale walk to David Bowie’s “Heroes,” and the thousands assembled rose in an ovation, clapping and lingering long after the models had exited to pay homage to Lagerfeld, who died on Feb. 19 after an unprecedented fashion career.

Chanel tucked a sketch into the press kits on each seat in Lagerfeld’s inimitable hand. It shows him standing with Gabrielle Chanel, and his handwritten caption read “The beat goes on…”

Standing out against the snow, dressed in a dramatic, beaded, ancient Egypt-inspired look from the house’s the Métiers d’Art collection, Monáe described the show as being “deeply emotional and magic at the same time.”

“I think you could feel his presence here today,” she said, adding: “Chanel was the first fashion house to invite me to a couture show. I hadn’t even put out my first album, and here I was in Paris. It’s always an experience that I take with me. Every time I leave, I feel inspired as an artist to create more memorable experiences.”

Like many guests, she recalled his biting humor. “He said so many things that were so blatantly honest and true. He didn’t mince words, as you know,” she said. But mainly, it was his work ethic that left an impression.

“He worked until the end — I think that’s fantastic. I mean, we wish that we could do that,” Campbell said. “Our whole industry is going to miss him. I mean, I worked with him on and off for 32 years and he became an institution. You just thought he would never leave, that he was immortal.”

Baptiste Giabiconi said he owed Lagerfeld his career. “These 12 years have been just fabulous. He totally transformed my life. He changed my life on every level — mainly professionally, but also personally. We had a very symbiotic relationship, I would say almost like a father and son,” the model said.

“I remember when we went to shoot a Chanel campaign in Bueños Aires in Argentina with Claudia Schiffer and Freja Beha [Erichsen], and there was a special atmosphere. Karl was happy. We were all happy over there. The photos were gorgeous. It was really a very special moment. We were like a family,” he recalled.

Sound designer Michel Gaubert, who started working with Lagerfeld in 1989, said his suggestions for show tracks could come from any field. “Sometimes he would give me the name of an artist, or a reference, or an idea, or the name of a play, a movie, a mood — and I would respond,” he said.

“The most important [thing he taught me] is self-confidence and a form of lightness. It’s only work. It’s very important, but he had the gift of making work easy and entertaining, which not a lot of people can do. With Karl, you had fun,” he said.

For Chanel’s art gallery-themed show in 2013, the music included Jay Z’s “Picasso Baby” played at full blast. “It was funny because one of the lyrics namechecks Riccardo Tisci and I said, ‘Shall we take it out?’ And he said, ‘On the contrary, let’s leave it in — it’s funny,’” Gaubert said.

Music is also what connected Lagerfeld and Caroline de Maigret, who in addition to being a Chanel brand ambassador runs a music production company with her partner Yarol Poupaud. She was on a break from modeling when Lagerfeld stepped into a radio truck where she was interviewing people during Paris Fashion Week.

“We talked about music for a very long time. And he’s so interesting, he’s so inspiring — it’s always a treat to have him for quite a while with you,” she said. That meeting led to Lagerfeld asking her to appear in Chanel’s cruise show in Saint-Tropez in 2010, and she has been a face of the brand ever since.

An emotional Audrey Marnay, who first met Lagerfeld when she was 16, said she’d learned a lot from him about books and art. “I will never forget,” she said. Quinones said she enjoyed spending time with Lagerfeld and talking about everything from art and movies to food.

“Karl just was very knowledgeable, very educated and really a pleasure to learn from, and to listen to, and to be around. So my best memories of Karl are honestly just being with him and watching him make the clothes was nothing short of incredible,” she said.

John Nollet worked with Lagerfeld on campaigns starring Vanessa Paradis, and paid tribute to his generosity and humor. The two first met when Lagerfeld shot a portrait of the hairdresser surrounded by his inner circle for French Elle.

“I came with close friends and also my grandmother, who arrived in a wheelchair, not because she couldn’t walk but because she was trying to take it easy. He immediately said, ‘No, no, I don’t want to see you like that. Stand up.’ He put away the chair and he made us all sit for the picture, with her standing up,” Nollet said.

“Incidentally, she was wearing a lot of rings and I know he photographed her hands. I think she was one of the sources of inspiration for his rings,” he added.

Inspecting the set before the show, Ellen von Unwerth noted that Lagerfeld always surprised and delighted the audience with his creativity and fantasy.

“An après-ski set in the mountains is very uplifting and joyful. It’s a nice surprise, like always. I grew up in the mountains in the south of Germany, so it feels like coming home,” noted the photographer, whose favorite memories of Lagerfeld were linked to his runway extravaganzas.

“I always went to congratulate him after each show and we always had a moment speaking German together, so it was like we were in a little bubble for one minute, cracking some jokes, and it was always a very intimate little moment,” she recalled.

Bamber, who got to walk in one of Lagerfeld’s Chanel shows, recalled her first time meeting the designer, after a tour of Coco Chanel’s apartment. “He always had time for me, and he gave me such incredible confidence, such encouragement,” she said.

French actress Clémence Poésy said: “It has always been such an honor to see his work, to get to wear what he was inventing, to get to see him create. It’s been a real treat in life.”

A guest poses on the Chanel show set.  WWD Staff

Before the show, guests walked around the village, taking photos in mounds of snow, in front of Chanel logo skis, and the Chanel Gardenia chalet at the top of the runway, dressed in their best looks from seasons past, one with the Chanel grocery basket in hand, another with the latest beach ball bag.

“I couldn’t have missed his last show,” said Farah Makras, a Chanel devotee from San Francisco.

“I love Karl, the fairy tale he creates, there is nothing like a Chanel show,” said New York client Beth Frank. “I got on the plane sick to come here. There is no way I was missing this one.”

“I have goosebumps,” said Celine Yuan, who splits her time between Paris and Taiwan and has been to more than 10 Chanel shows. “It’s historic.”

“He’s a legendary person, and I’ve been wearing Chanel since I was 23 years old, 30 years now,” Evelina Pietruschka, a financier based in Beverly Hills, said of the late designer, wearing a navy couture dress with a round collar and a bow, a favorite Lagerfeld flourish. “I feel very proud to wear his clothes.”

The Beat Goes On at Karl Lagerfeld’s Last Chanel Show