At Vanity Fair’s opening night dinner for the Tribeca Film Festival everyone in the house seemed eager to meet Bono. 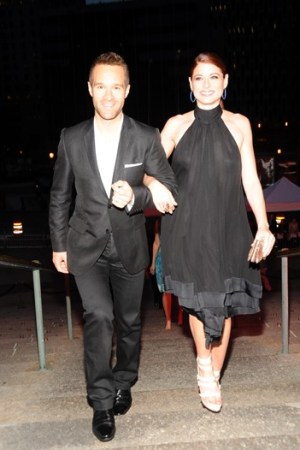 At Vanity Fair’s opening night dinner for the Tribeca Film Festival on Tuesday at the Supreme Court on Centre Street, Les Moonves was huddled with Judy McGrath, Jann Wenner was pow wowing with Larry David, Kanye West was immersed in a deep conversation via text message on his BlackBerry and everyone in the house seemed eager to meet Bono, who arrived in typically tinted sunglasses, and typically declined interviews.

“I’m here working on ‘Spiderman the Musical’ with Julie Taymor,” he said. “I don’t want to talk.” Taymor was nearby and was happy to. “He and the Edge are the composers of the show,” said the woman who brought “Lion King” to Broadway and made a movie-musical out of Beatles’ songs. “He’s so much fun,” she said of Bono. “Watching him and the Edge is like watching the best married couple ever.”

Lee Radziwill was nearby, smoking a cigarette that was thinner than a piece of paper. What did she think of “Grey Gardens,” the HBO movie centering around the lives of her two famously reclusive cousins? “I thought it was excellent,” she said. “Drew’s voice was identical to Edie’s.”

And, she said, people can stop debating about whether Albert and David Maysles exploited her cousins. “At first, I worried about it,” she said, explaining that she “wasn’t sure” what to think when she first saw their famous documentary on the two women. “But then I saw how much they loved it.”

Which just goes to show you can’t really exploit a person who wants to be exploited. As guests made their way from the atrium out front to the dinner inside, someone expressed wonder that Larry David had actually shown up to a party to help promote “Whatever Works,” the new Woody Allen comedy that’s opening the festival. “I’m not anti-social,” he said. “I’m anti-social once I get there and realize there’s no one I want to talk to. But I do go out.” Of course, the same could not be said for his director, who was a no show Tuesday night.

A slightly more gregarious Robert de Niro, whose company Tribeca Films runs the festival, gave a speech after dinner that went as follows. “It’s great to have everyone here. It’s just great. Great.”