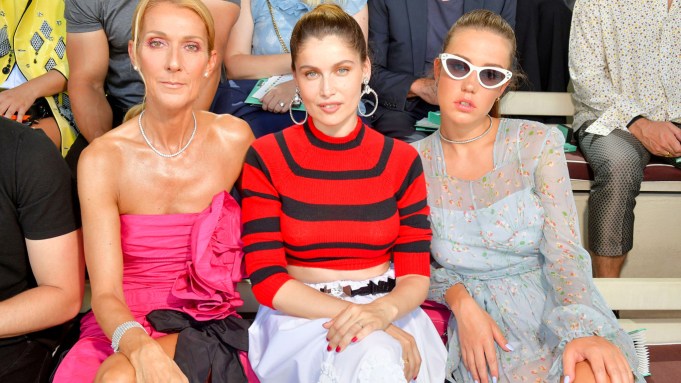 HORSING AROUND: Dressed in a pink ruffled bustier dress with matching eyeshadow, Celine Dion was the star attraction at the Miu Miu cruise show, held Saturday at the Hippodrome d’Auteuil race track in Paris’ 16th arrondissement.

The singer was surrounded by a legion of fans, including Nicole Richie, who is in Paris for two weeks “with Heidi Klum, Carine [Roitfeld] and Naomi [Campbell]” shooting a new show for Amazon Prime, titled “Making the Cut.”

“I heard you were wearing pink, so I’m wearing pink. We’re doing our act together now, we’re a duo,” said Richie before settling into her front-row seat in the stands to take in a horse race that preceded the show. She confessed she was new to the whole betting game. “I have gambled before, but I’ve never won anything in my life. The concept of beginner’s luck never hit me, I literally have never won a penny, not from a slot machine, nothing,” she shrugged.

“I’m an actress, that’s a gamble enough,” said Gabrielle Union a few seats down. “This is just sick, and getting to see icons like Celine Dion, I’m dying,” sighed Union, who in terms of her projects has the live shows of “America’s Got Talent” coming up as well as the TV series “L.A.’s Finest,” starring opposite Jessica Alba.

Melting in the heat wave, Mackenzie Foy, who kept mum on the details of her role playing opposite Kate Winslet in the Ashley Avis-helmed contemporary remake of “Black Beauty,” which is yet to begin filming, batted her Miu Miu fan as the steaming winners of the race were paraded in front of the guests, before being hosed down. Not everyone lucked out. “I bet on 11 and mine went off to the side, he didn’t win, he was a little hot perhaps,” said Taylor Russell, looking a little miffed.

After the show, held on a striped runway at the foot of the stands, the festivities continued inside the venue. A giant disco ball suspended over a dance floor covered in a groovy rust-hued carpet awaited guests, with waiters circling through the space proffering plates of caviar and risotto. But joining Miuccia Prada, many opted to stay outside, perching in the stands to savor the view and the experience. Luka Sabbat, who said he’s more into “wild horses” than thoroughbreds, was catching up with Kaia Gerber, fresh from walking in the show. “I grew up riding horses, it was beautiful,” said the model, nicely blending in with the scenery in her sporty Miu Miu bob hat.