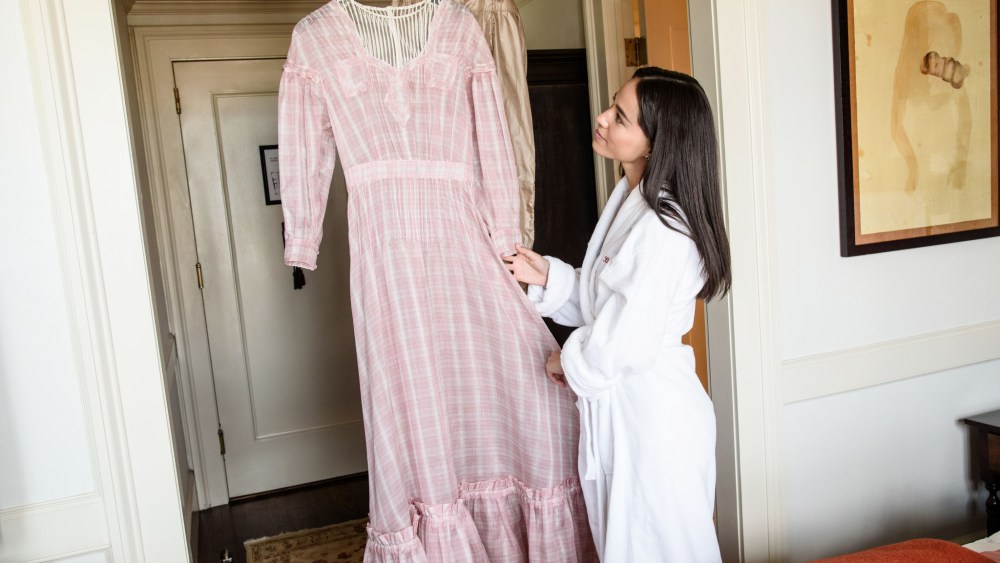 Kelsey Asbille was midglam on Monday afternoon, sitting in a robe facing the paneled window overlooking the downtown cityscape from her room at the Bowery Hotel. In just a few hours, she would be making her way to the Brooklyn Museum for the CFDA Awards as one of Raf Simon’s guests — one of two celebrity guests accompanying him this year. Her look for the evening soon began to arrive, in pieces: first the rubies from Tiffany & Co., followed by the Calvin Klein dress and shoes.

“My first time working with Calvin was going to the Tiffany Blue event, and I’m wearing Tiffany for the ‘Yellowstone’ premiere and the MTV Movie Awards — I’m doing a Tiffany’s-and-Calvin throughout,” she says of her upcoming media appearances.

The 26-year-old actress, who is starring in Taylor Sheridan’s “Yellowstone” series out June 20, and starred in his “Wind River” last summer, speaks with assured calm — which bubbles over into sheer excitement at the prospect of the evening ahead.

“I’m really excited to be a part of it and see Raf, and then the rest is like an open book. I’m going to be taking it all in. Naomi Campbell’s going to be at the table — which is so wild,” she says.

The invite had come only the week before, when she met Raf during a fitting for the Calvin Klein By Appointment look she’ll wear for the “Yellowstone” premiere.

“My stylist Danielle Nachmani thought it was a good fit,” Asbille says of linking up with the brand. “I met the team, and Raf had seen ‘Wind River’ a couple of times. He said he saw it twice,” she continues. “It was definitely a ‘pinch me’ moment.”

There’s a knock at the door, and the garment bag arrives: inside is a flowy checkered Pioneer dress from the Calvin Klein 205W39NYC fall collection, and a pair of powder blue suede heels.

“I had the opportunity to go to the show, and when I saw this series walk it was my absolute favorite. So when we found out from the Calvin team that she would be attending the CFDAs as a guest of Raf, I immediately was like, we have to do one of these gowns,” says Nachmani, who shows up as Asbille is finishing hair and makeup. “I think it’s really rare that you find a designer who emulates that Americana feel in a way that still feels fashionable and luxurious.”

“I love how this season is all kind of Americana, which I think fits really well with ‘Yellowstone’ and ‘Wind River,'” Asbille adds. “I think it’s almost like [Sheridan] and [Simons] are both reinventing the American western…it seems fitting.”

The day after the awards, Asbille was headed back to her hometown in South Carolina; if “Yellowstone” gets picked up for a second season, she’ll head to Utah and Montana to spend the summer filming. At some point she’ll be back in New York to continue working on her degree at Columbia, where she’s studying Human Rights with a focus on Indigenous Rights. (As far as credits go, she’s currently a junior.)

“This year I got to go to the UN indigenous forum, which was incredible. I got to see David Archambault, who was the chairman of Standing Rock, and he came to the Sundance premiere for ‘Wind River,’ so it was kind of nice to see him in both settings,” she says. “Will Moreau, who was chief of the Cherokee tribe in South Carolina, he told me that you should always bring it back to your community, and be active in your community. So I guess you start there first. I think it goes so hand-in-hand with my work,” she adds.

“I think that what’s cool about ‘Yellowstone’ is it does show native communities today, but it also it shows a world that most people don’t know about,” she says. “It also shows the resilience of the people and the beauty of the culture, and I think that’s important,” she continues. “Indigenous populations globally, they’re treated as if they’re invisible. So I think that kind of positive awareness is important.”