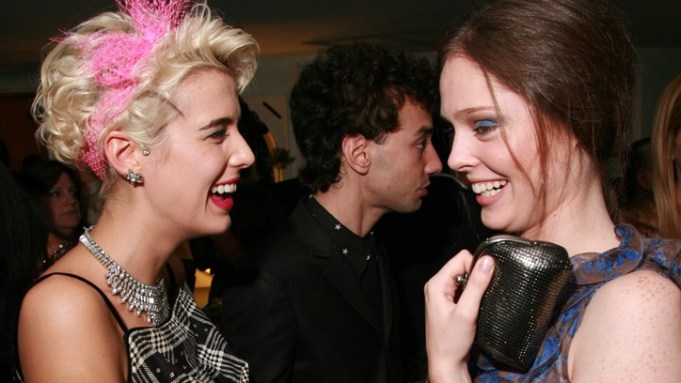 Taxis and town cars were in high demand Tuesday night as the social set shuttled uptown and down. The first stop for many was a cocktail party for the 10 finalists of the 2008 CFDA/Vogue Fashion Fund, hosted by Diane von Furstenberg, Anna Wintour and L’Oréal’s Carol Hamilton, where each designer’s custom creation was modeled by a celebrity date. Alexander Wang arrived to Wintour’s West Village home with his friend Zoë Kravitz. “He didn’t bring me a corsage,” she complained.

“I offered to stop at a corner deli,” he protested.

Meanwhile, Vena Cava’s Sophie Buhai and Lisa Maycock came with Raquel Zimmermann; Jason Wu had been paired with Leighton Meester; Olivia Thirlby accompanied Irene Neuwirth, and Richard Chai found himself in a stylish love triangle with Coco Rocha and Jamie Johnson, both in his designs. By the end of the evening, Lake Bell and her date, shoe designer Alejandro Ingelmo, were still in love in spite of the fact that she caught him taking Rocha’s digits. “It’s OK. We have an open relationship,” she sighed.

The next stop was Saks Fifth Avenue’s Key to the Cure fete at Top of the Rock. There, Samantha Ronson spun for guests, including her girlfriend Lindsay Lohan, co-hosts Jane Krakowski and Blythe Danner, Lisa Airan, John Tisch and Fabiola Beracasa. Becki Newton and Debra Messing wandered the party together. Newton found her friend made an easy shield for the Champagne spill on the front of her dress.

Luckily, the “Ugly Betty” star had a change of clothes in the car, so by the time she arrived to von Furstenberg’s studio for a party marking the launch of the new Wonder Woman-inspired clothing collection, Newton had swapped her Ports 1961 for DVF. To read more about Diane von Furstenberg’s party, click here.