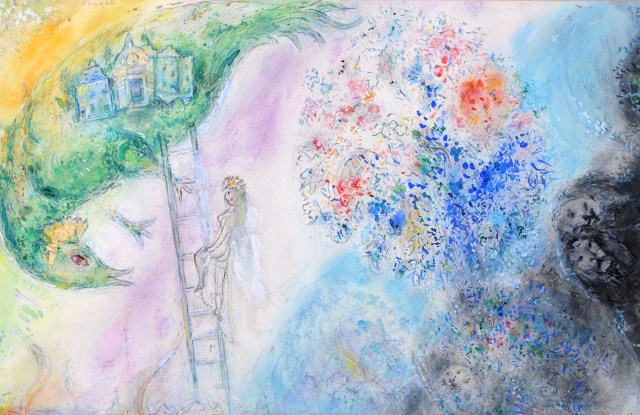 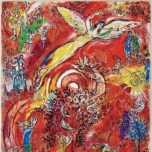 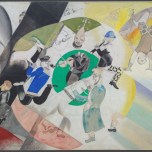 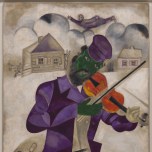 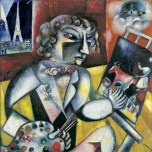 In his 97 years Marc Chagall, the great modernist painter of the early 20th century, defied every expectation as to where his childhood passion for art would lead him.

Indeed, in spite of poverty, two World Wars, ethnic persecution and other injustices he confronted in life, this son of a Jewish herring merchant who grew up on the fringes of the Russian Empire conquered the art world’s most sophisticated salons, using his fantastical visual language to record the joys and terrors of the 20th century.

Yet throughout such extraordinary upheaval, music remained a constant source of inspiration for Chagall, both for his compositions and the intensity and range of colors used in his sweeping body of work. That profound influence is showcased for the first time in “Chagall: Color and Music,” a major multidisciplinary exhibition debuting on Jan. 28 at the Montreal Museum of Fine Arts.

“Though there is no proof that Chagall ever played an instrument, music was a pervasive force in his life and work from the beginning,” said Anne Grace, the museum’s curator of exhibitions.

“Very early on we see how the musicality of the Yiddish language, the role of the synagogue, the influence of family members — several of whom were musicians, and the whole cultural context of his childhood in his native city of Vitebsk influenced Chagall by 1910,” said Grace, who co-curated the show.

Beyond 1911, Chagall’s exposure to jazz and his first collaborations within the ballet world expanded his musical appreciation. Yet according to Grace, “What really distinguishes this new exhibition is the impact of music on the different forms and media Chagall worked in.”

Featuring more than 400 pieces which span the artist’s years in Russia, Paris, his exile in New York, his time in Mexico and his later life in the South of France, the exhibit includes paintings, sculptures, ceramics, tapestries, as well as Chagall’s costumes and décor for the operas and ballets “Aleko” (1942), “The Firebird” (1945), “Daphnis and Chloe” (1958-59) and “The Magic Flute” (1967). Indeed, more than 50 costumes and masks lent by the Paris Opera, the New York City Ballet and the Metropolitan Opera evoke the ambiance of each production.

The exhibition opens with Chagall’s seven-panel designs for Moscow’s Theater of Jewish Art in 1920 – his first monumental décor created for the stage and a key piece from his years in Russia.

The show also presents the North American debut of Chagall’s stained glass from France and includes several major works from 1910-1920, when the artist was experimenting with avant-garde movements like cubism and orphism. That roster includes “Golgotha” (1912), “Self-portrait With Seven Fingers” (1912-1913) and “Birth” (1911-1912), which are all rarely loaned.

“The insurance value for this exhibition is priceless,” said Grace. “Half the works come from a private collection in Europe and are rarely ever seen.”

Finally, “Color and Music” presents an ultrahigh resolution projection of the ceiling of the Paris Opera painted by Chagall, created by the Google Cultural Institute in Paris.

In total, it’s a fitting tribute to a visionary who once said, “Color is vibration like music; everything is vibration.”

Indeed, Paul Versteeg, an assistant to Chagall who is still alive, witnessed him painting the Paris Opera, recalling that vibrating omnipresence of music as Chagall chose the composers for this monumental composition. Interestingly, Chagall listened above all to Mozart, particularly “The Magic Flute,” as he painted.

“Chagall was resilient, as are many people who approach 100. He saw the best and worst of times. But music nourished the man and the artist,” said Grace. “That never stopped.”

“Chagall: Color and Music” travels next to the Los Angeles County Museum of Art on July 30, where it will remain until Jan. 7, 2018.