Chanel and Charles Finch Offer Shelter to the Stars

Stars including Drew Barrymore, Mick Jagger and Hugh Dancy turned out for the annual dinner at Madeo. 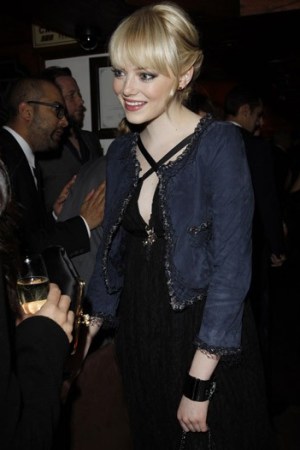 No one was showing signs of Oscar fatigue by Saturday night, judging by the number of stars who turned out for Chanel and Charles Finch’s annual dinner at Madeo.

Mick Jagger, Harvey Weinstein, Sharon Stone, January Jones, Drew Barrymore, Emma Stone, Ginnifer Goodwin, Emma Roberts, Cate Blanchett, Claire Danes, Hugh Dancy, Fabiola Beracasa and Tory Burch were among those who filed into the intimate Italian restaurant, where they were serenaded by a mariachi band on the stairs. Most of the guests arrived with windswept hair due to the unseasonable weather (it actually snowed in some parts of Los Angeles that night).

“That’ll teach me not to go without tights ever again,” said a bare-legged Naomi Watts. Other like Camilla Belle and Lily Collins stayed warm in Chanel tweed, while Elizabeth Reaser and her boyfriend, director Gavin Wiesen, cuddled by the bar.

“This feels so exclusive,” said Reaser. “Why am I here?”

For Oscar week newbie Jason Wu, it was a chance to take in the Hollywood scene.

“This feels like the after party now that my show is done,” he said. In fact, few remembered that they were actually there for dinner until Finch said, “Can someone ring the dinner bell, please?”