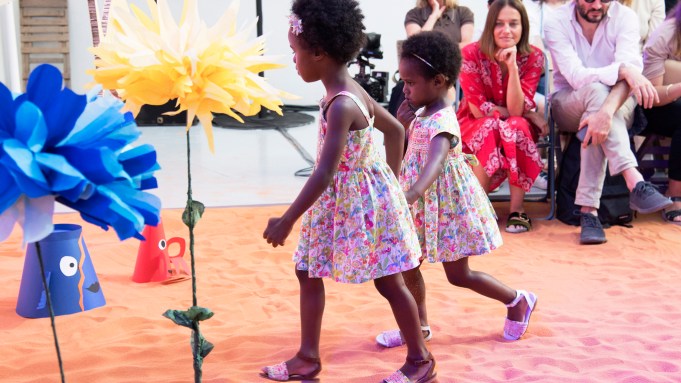 SUMMER FUN: On a family trip to Paris, Chanel Iman was right at home at Bonpoint’s summer holiday-themed show Wednesday afternoon. Dressed in an adult-sized outfit from the high-end kids’ label, the model had brought along husband, footballer Sterling Shepard, and baby daughter Cali, who is nearly one.

“We’re here enjoying Paris, it’s the first time in my whole career I actually get to enjoy the city and bring my family,” she smiled.

On the sand-covered runway for Anne Valérie Hash’s first collection for the label, chef Jean-François Piège’s three-year-old son Antoine was one of the youngest models. Obviously a little overwhelmed by the experience, he ran across to hug his parents in the front row instead of following his fellow mini-models down the runway, provoking a round of “awws” from the other front-row guests, who included Lauren Santo Domingo, Marie-Ange Casta and Audrey Marnay.

Piège has a new baby of another kind; he just opened his fifth restaurant — his first outside Paris — in the Provençal town of Gordes.

Casta said she was ready for a vacation, after completing several months of work on a documentary just a day earlier. “I’m going to start writing again, but not before September, I need a vacation,” she said.

Speaking of holidays, Olivier Saillard described himself as “a bit of a tourist” at the show, to which he had come along to support Hash. “It’s a bit beyond my realm of expertise,” said the fashion historian of the kiddy catwalk, with its beach hut decor and ice cream stall.