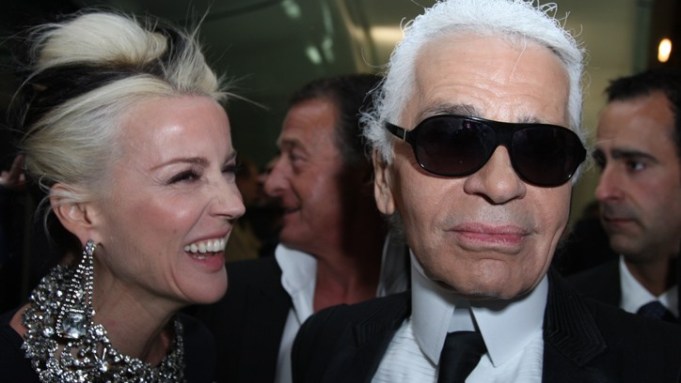 The fashion flock braved chilly temperatures and brisk winds to pay homage to Chanel and Karl Lagerfeld Tuesday night at a fete for the New York landing of the traveling Chanel Mobile Art exhibition. Resembling a UFO from Planet Chanel, the Zaha Hadid-designed temporary structure was erected in Central Park’s Rumsey Playfield.

The stiletto-shod guests—many of the French, black clad persuasion as well as starlet Kate Bosworth and rapper Eve—trekked through the park to reach the open-air venue, which featured an outdoor bar; an army of waiters serving hot toddies and mini-plates of short ribs, cod and foie gras ravioli, and a space-age steel enclosed lounge where the band Hercules and Love Affair later performed to a packed house.

But the art was really the star of the evening: despite their whisper-thin cocktail dresses, even VIPs gamely waited in line to get inside to see the specially-commissioned works (all inspired by the French house’s iconic 2.55 bag).

A shivering Pixie Geldof wasn’t going to let the nip in the air deter her. “I came to see Chanel——I’m going to see Chanel!” she declared.

Apparently even connections didn’t allow one to cut straight to the front: a few feet behind Geldof was a patient Tallulah Harlech (daughter of Karl Lagerfeld muse Amanda).

The designer himself arrived with black-clad entourage in tow just in time for a quick run-through of the pod. As he was mobbed by fans taking pictures of him with cell phone cameras, a meek Sarah Jessica Parker stood off to the side.

“We’ll wait in line to see Karl,” she reassured an anxious pr person who was trying to push her through.

“It’s a pleasure to see you,” said Lagerfeld when her turn arrived.

And Parker was clearly there for more than just a photo op. Minutes before the performance was set to begin, she snuck in a speedy viewing of Hadid’s creation——though she had to ask permission first.

“We’re just going to take a quick peek at the pod——if that’s okay with you?” she asked Lagerfeld politely.

Meanwhile, other guests were just trying to stay warm, though their sartorial choices were perhaps not the most practical.

“I can’t cover up this dress,” said Raquel Zimmerman in mock horror at the thought of donning a coat over her gossamer Chanel frock. In a similar predicament was Katie Lee Joel, who had developed a tactic for heating up. “I’m drinking—alcohol helps,” she smiled.