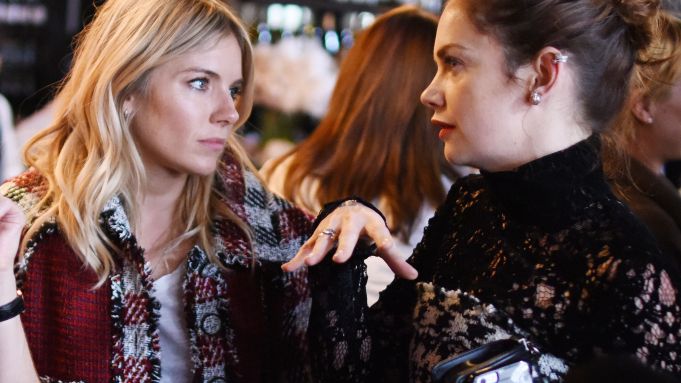 “I think the sea is changing — it’s definitely shifting,” Rashida Jones said from the dining room at Locanda Verde. She was surrounded by a tide of her female cinematic peers — Sienna Miller, Katie Holmes, Emily Mortimer, Ruth Wilson — who had gathered to celebrate the start of the second annual Through Her Lens: Tribeca Chanel Women’s Filmmaker Program.

“Everywhere I go, there are so many more opportunities for women than when I was 30,” Jones continued. This year, she’s paying it forward and participating in the program as a mentor for emerging filmmakers. “No one’s ever asked me to be a mentor before, so I’m very flattered,” she added. “I selfishly feel like I have a lot to gain from it. But I also think of how many people I went to when I first started writing, who were kind enough to read my scripts, and give me notes. It feels like a natural cycle that you have to give it back.”

Cinema may have a reputation for being a “boys’ club,” but at Tuesday’s kick-off luncheon, men were the minority in the room.

“I think that this year has really been all about women, and I’m honored to be in the company of these people who are really trailblazing their way in an industry that’s notoriously misogynistic to women and imbalanced,” remarked Miller, huddled near Carmen Ejogo and Gillian Anderson during the pre-lunch cocktail. “As much as it’s wonderful to come and see friends that I grew up with, it’s also nice to feel part of a community that is galvanizing to change,” she added.

“We have a very distinctive voice, and our voice has been restricted for years,” said Wilson, who gave a shout-out to a handful of recent female-driven projects — Kelly Reichardt’s “Certain Women,” Amma Asante’s “A United Kingdom,” Clio Barnard’s “Dark River” (in which Wilson is the star.) “You see it more and more behind the screen as well, you see the crews are becoming more and more feminine,” she said. “You’re seeing each area expand and open up the doors to women. It’s a different lens by which you see the world, and it’s important that everyone gets the chance to see that.”

And, seeing as how it was a room of women…

“Good afternoon, all you nasty ladies,” said Tribeca Enterprises executive chair Jane Rosenthal, the room cheering in response. With that, lunch was served.