"It's a building, but also an object at the same time," said Karl Lagerfeld as he toured Chanel Mobile Art on Wednesday night. "It's like a sculpture you... 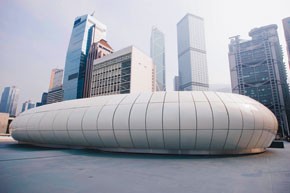 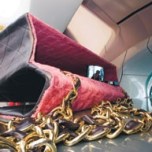 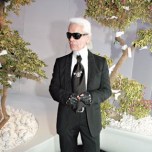 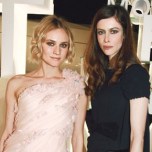 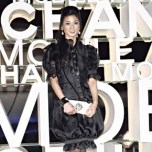 HONG KONG — “It’s a building, but also an object at the same time,” said Karl Lagerfeld as he toured Chanel Mobile Art on Wednesday night. “It’s like a sculpture you can walk in.”

“It’s a masterpiece,” he continued, adding, “and worth the trip to Hong Kong.”

The pavilion officially opened its doors last week, but the party only got started when Lagerfeld arrived in Hong Kong to see the exhibition for himself. To mark the occasion, hundreds of guests gathered atop a car parked next to the demolished old Star Ferry pier, where the Mobile Art exhibition has been drawing crowds of art lovers, architecture aficionados and curious onlookers.

Zaha Hadid, the Pritzker Prize-winning architect who designed the container, was also along for the ride. Her pavilion is based on a distortion of a torus, with no straight lines and no corners. It houses works by 20 contemporary artists, including David Levinthal, Daniel Buren, Yoko Ono, Wim Delvoye and Nobuyoshi Araki.

Hadid, nearly as swarmed by the press as Lagerfeld, said her biggest challenge was in designing something that could travel, but she also wanted to demonstrate that “you don’t have to show art in a white box. This [project] started with abstraction, but the ambition was to create a fluid space,” she said. Hadid also commented on her decision not to design something vertical. “People think women don’t design towers and men do — for obvious reasons. I don’t have the ambition to do tall buildings; you have to think about what they mean….It’s about appropriateness,” she said.

Visitors to the exhibition, which charges no admission, are taken on guided tours, thanks to personal MP3 players that provide a combination of custom-designed music by Soundwalk’s Stephan Crasneanscki and narration by French actress Jeanne Moreau. It is Moreau who provides Hadid’s favorite part of the Mobile Art experience. “Jeanne Moreau — her voice is the kind one doesn’t hear anymore, which is the downside of not smoking,” said Hadid.

For Lagerfeld, Tabaimo’s “At the Bottom” was the highlight. “I think there’s a little too much inside [the pavilion] — but my favorite thing is the one like a well. I am mad for that one,” the designer said, noting that he also likes Araki’s depiction of “naked woman turning into a flower.”

While the disparate artworks and the building itself might seem to have only their modernity in common, they were all inspired by elements of Chanel’s iconic handbag. In the case of the stark white building itself, thousands of squares on the surface pay homage to the company’s hallmark quilted leather. Inside, the artists have been inspired by everything from the bag’s leather-and-chain shoulder strap to the jealousy that arises when only one woman in a group has a bag.

“It’s very flattering — it shows people are interested in what we did — I think it’s a compliment,” said Lagerfeld of the artistic interpretations.

Surrounded by socialites and fans on the lower level of the parking lot, which had been turned into an industrial-chic lounge for the evening, Lagerfeld deflected praise for the project.

“I am not the curator, I just had the idea, the concept, and all I thought of was the name,” he said, adding that he doubted whether he would see the exhibit as it moved to other cities. “We have so many collections, one after the other, I’m not sure if I’ll see it in other places. But it’s so nice to be here for the first one.”