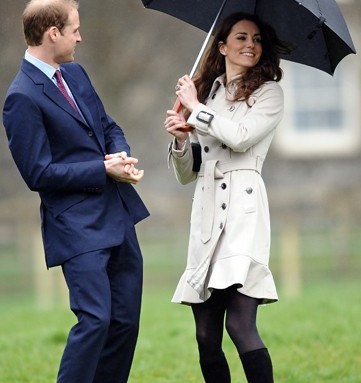 LONDON — He collects a regular paycheck from the Royal Air Force and commands an annual salary of about 40,000 pounds, or $64,000. She shops at Bicester Village, the designer outlet, and trawls the sales at Peter Jones, the London department store beloved of middle-class England. They fell for each other at university, dated for years, and now live together in a rented cottage costing 750 pounds, or $1,215, a month in north Wales, near the RAF base. Their wedding will be huge and watched by almost 1 billion people worldwide, although they’ve told the 1,900 guests they prefer charity donations to gifts. After a brief honeymoon in Britain, they’ll return to their quiet village life in Wales — and, please, no servants.

So is this what it means to be 21st-century royalty?

Much has been made of the modern, approachable, and inclusive attitudes of Prince William and his fiancée Kate Middleton. They appear to have the common touch, and then some. They’ve invited the butcher, pub owner and postman from Kate’s hometown to the wedding, while snubbing the Obamas, the Sarkozys and even Sarah Ferguson. Although the 1,900 guests and global TV audience won’t exactly make for an intimate wedding at Westminster Abbey, the list is down from the 3,500 people who attended the wedding at St. Paul’s Cathedral of Prince Charles and Lady Diana Spencer. William is even said to have defied courtiers’ pleas for a summer wedding and insisted on a short engagement. Apparently, the reasoning was that he and Kate had been together for so long, and because they didn’t want the public to get bored.

William and Kate get it. They’re aware that — readers of Hello! aside — people’s lives do not revolve around the Queen’s choice of hat for the big day or the royal honeymoon destination. “It’s no longer about awe and dignity. William and Kate are like us — yet so not like us,” says Peter York, the management consultant, broadcaster and co-author of “The Official Sloane Ranger Handbook.” York calls the couple modern, identifiable and mainstream, notwithstanding the round-the-clock security, castles scattered around the country and skiing holidays in Klosters. “They were university sweethearts. A lot of people could think, ‘That happened to me,’ or ‘That happened to my son or my daughter,’ ” he says.

The common touch isn’t any accident. One of the late Princess Diana’s great aspirations was to give her sons as normal an upbringing as possible. Her style was the opposite of the cold, Edwardian approach to child rearing that was the norm for previous generations of upper-class children — and one that she and Charles were all too familiar with. Diana took her boys to McDonald’s, to the Odeon cinema and to Selfridges to see Santa, where they queued with the hoi polloi.

Thanks in large part to Diana, Princes William and Harry are the first generation of heirs to the throne who have grown up with publicly affectionate parents. Even today, Prince Charles will put his arm around his sons, something that was unheard of when he was growing up. Royal watchers have long described the Queen and Prince Philip as distant, formal parents, as that was the parenting they themselves grew up with in the Edwardian era.

As a result, William and Kate could be seen as the first of Britain’s truly modern royals — relaxed, not stuffy; laughing and smiling in public and able to cope, up to a point, with the media intrusion that will now follow them wherever they roam.

“William lives in the real world,” says Dickie Arbiter, a former press secretary to the Queen, broadcaster and journalist. “He had an outward-looking mother, he went to university and his job in the Royal Air Force involves rescuing people, saving lives.” He also points out that William has had a different bachelorhood than his father did. “He’s had Catherine as a girlfriend for the past eight years — that didn’t happen with Charles and Diana. Life is vastly different for all of us in the 21st century. It evolves, and we evolve with it,” he says.

Bruce Oldfield, who famously dressed Princess Diana and who is tipped to be designing Middleton’s wedding gown —or at the very least dressing some of the wedding party and guests — believes the entire Windsor clan has come a long way since the young Lady Diana Spencer swept down the aisle of St. Paul’s. “I hope — and I feel — there is a much more modern family in waiting for Kate. There has been lots of change over the past 30 years. The royals are much more relaxed, and they are marrying outside their class,” Oldfield says. Indeed, much has been made about Prince William marrying a commoner, although he’s certainly not the first of his family to do so. Princess Diana and Camilla Parker-Bowles were not born royals, and neither was the late Queen Elizabeth the Queen Mother. Princesses Margaret and Anne both married commoners, as did Princes Andrew and Edward.

In addition to opening their hearts and minds to a wider public, the British royals have been evolving in other ways, too. In this Internet age, the family who struggled with how to address the nation when Princess Diana died has at last learned to manage their communications better and work more constructively with the media. Witness the regular drip-feed of news from Clarence House — via e-mail and Twitter — about the upcoming nuptials, and the launch earlier this month of the official royal wedding Web site in response to popular demand. According to Max Clifford, the London public relations expert and crisis manager, the royals now come under the same scrutiny as politicians and government officials, and they have to behave accordingly. “Fifty years ago, the royal family was at the heart of everything. Today people question —and don’t just accept — how they live. The British people want to know, ‘What are we getting back from them?’ ” he says.

In a recent article for the London Evening Standard newspaper, media commentator Roy Greenslade wrote that William — who is no lover of the media, and who does not hesitate to call in the lawyers when he feels his or Middleton’s privacy has been invaded — has had to perfect a balancing act. “William must give enough of himself and Kate to the media to ensure that the public do not turn their back on royalty,” wrote Greenslade. “My feeling is that, so far, he has just about pulled off the trick of balancing the public and the private.”

Indeed, since their engagement, William and Kate have kept a low profile. The only true paparazzi snaps of Middleton since then have been one of her shopping at the upscale supermarket Waitrose near the couple’s Anglesey, North Wales home and another of her leaving a lunch at the Berkeley Hotel with the Duchess of Cornwall. In March, both the bride and the groom managed to outfox the tabloids with their farewell parties: Kate had a private hen do at a friend’s home, and William was said to have had his stag party at a pal’s family home in Norfolk. Both were miles from the raucous nights out that earlier generations enjoyed. Remember when Di and Fergie, dressed as policewomen, gate-crashed Prince Andrew’s stag night in 1986?

In his piece, Greenslade rightly pointed out, “There has been nothing like the media hysteria surrounding William and Kate as there was during the build-up to the wedding of his mother and father in 1981. Diana could not move without the royal rat-pack being far behind.”

Although William appears to have his relations with the media well under control, he still faces a host of challenges going forward. Kate Middleton will be a vibrant, beautiful young princess — and the world will expect its regular dose of news about the fairy tale they expect her to be living. “He is part of a cycle of change,” says Tristram Hunt, the British historian and a Labour member of parliament, of Prince William. “Look at the Prince of Wales — who became King Edward VIII — who in the 1920s visited the impoverished coal mining villages and embraced the media. Look at what Prince Charles has done.”

In his article “Monarchy in the U.K.,” published earlier this month by the British think tank Institute for Public Policy Research, Hunt argues that Prince Charles has been a trendsetter with his charity and public service work, helping to shape the image of a “welfare monarchy” for Britain.

Hunt believes that one of William’s challenges is to make the royals a more inclusive bunch. “William’s world is very circumscribed, and his social set is pretty exclusive,” says Hunt. And he’s right: For all their seeming openness and ease, William’s circle remains small, WASP-y and full of willowy girls with double- and triple-barreled names and male heirs to the great estates, titles and fortunes of Britain. He may be a member of the RAF now, but he’s heir to a throne and one of the world’s largest fortunes.

Hunt suggests that William hire some fresh faces at Clarence House, rather than the usual crowd of posh ex-Army folk, to broaden his world. “If the Prince can marry a commoner, then he can certainly start to surround himself with a few more different stripes,” Hunt writes. He also urges William to call for an end to primogeniture — whereby a family’s eldest male inherits the title and estate — and to make a happy marriage, which Hunt believes would be “a deeply progressive act” in a family in which his father, uncle and aunt all got divorced.

William will almost certainly have ample time to make any changes. Given the longevity of his family, he may not even get near the throne for another few decades, when he’ll most likely be a middle-aged husband and father, and dealing with other challenges.

Like Hunt, Dickie Arbiter also sees the young prince as part of a bigger cycle. “Don’t expect change — forget about change,” he says. “The royal family has been evolving and adapting over the past 1,000 years.”