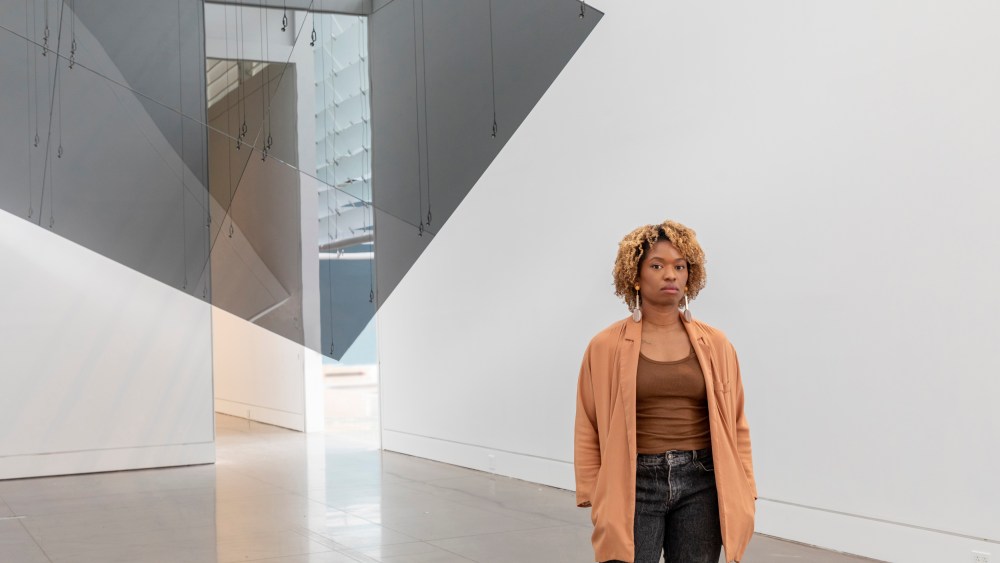 On an early afternoon in late August, getting to the Queens Museum in Flushing Meadow Park was a challenge. The U.S. Open had just kicked off, bringing waves of traffic and visitors to the area; cars pulling into the park’s Meridian from Grand Central Parkway were backed up.

The Queens Museum, located steps from the National Tennis Center, was closed for the day and in the early stages of installation for artist Charisse Pearlina Weston’s solo show, “of [a] tomorrow: lighter than air, stronger than whiskey, cheaper than dust.”

When Weston was approached about mounting an exhibition at the museum in the spring, she found herself drawn to the history of the park, which is littered with architectural ephemera from the 1964 World’s Fair. “All of my work is tied in by my interest in thinking about ideas of Black intimacy and interiors and architecture,” she says.

The Unisphere is visible from the museum, as is the steel-and-concrete fair pavilion designed by Philip Johnson. The fair was orchestrated by urban planner Robert Moses, whose influence on the city is particularly visible in the museum’s central exhibit, The Panorama of the City of New York. Moses’ design choices have had lasting impacts on different neighborhoods and communities; discourse around his work often highlights racial biases in his infrastructure and green space choices.

Weston’s Queens Museum exhibition was inspired in part by a civil rights protest that was planned in response to the World’s Fair. “The idea was to stall cars around the motorways to prevent people from coming. And it was supposed to represent the ways in which anti-Blackness was and still is hindering the ways that Black people can be in the world,” she says. “And I was interested in the way that the entire city and the nation responded to this idea of stalling access.”

The protest ultimately didn’t happen; there was so much pushback against the plans to block the roads around the fair that the city passed a law making it illegal to run out of gas on the throughway; participants could be arrested and fined.

“I have been interested in ideas of stall and delays as tactics of resistance,” says Weston. “So when I found out about this history, it tied in perfectly with my work. I’ve also been thinking a lot about architecture and how certain aspects of architecture reinforce protocols like movement, modifies the way that we experience space. This location worked perfectly because it has histories that connect to those things in different ways,” she adds. “This is the first time that I’ve had the opportunity to make this kind work at scale, and then have it really be in conversation with the space that it’s in.”

The show stretches across two exhibition rooms. One room contains a large glass installation work suspended from the ceiling; the other, smaller mixed-media glass sculptures that incorporate photography, some found within the Queens Museum archive. Weston incorporated photography of historical instances of Black resistance, drawn to imagery that recurs within the media. In addition to the 1964 protest, she pulled from the Watts riots and more recent 2020 Black Lives Matter protests. All of the photos have been distorted and skewed.

“I don’t necessarily like showing images of violence, especially on Black bodies,” she says. “So I always try to distort the image in some way to complicate the consumption of the image.”

The large-scale glass installation physically blocks the entrance leading to the second gallery, another commentary on stall and delay. Weston was inspired by Richard Serra’s “Delineator” installation, which included two metal plates, one on the ground and the other suspended above.

“The idea was he’s creating a space within [the plates] that modifies the outer space of the gallery,” she says. “There’s also this element of risk, like, will you step under it? So I was thinking about that and this idea of modifying space, the role of architecture. Glass makes the illusion of what it takes to hold the piece completely transparent.”

Weston, originally from Texas, moved to New York in late 2019 after completing her master of fine arts to participate in the Whitney Museum’s Independent studio program. She’s since completed residencies with UrbanGlass in Brooklyn and the Museum of Art and Design, which awarded her its Burke Prize in 2021. The award, which includes a $50,000 gift, allowed Weston to quit her day job to fully focus on art. This fall, Weston began a research fellowship at the Bard Graduate Center.

Her fine art practice spans sculpture, installation, video, photography, painting and the written word. Her approach to poetry and architecture is also apparent in her titling — for example, “and rust flows down, glistening (…to neon, to rolled sleeves, to arms, to pause)” — which includes its linguistic scaffolding through brackets and parentheticals.

“When I started off in painting I felt I was romanticizing the field of painting too much to actually push its boundaries,” says Weston, adding that broadening her practice to incorporate other forms unlocked new opportunities for creation. Exposure to Houston’s art scene, heavy on installation work and social practice, was foundational. “It opened me up to realizing that I can intermingle materials in really interesting ways,” she says.