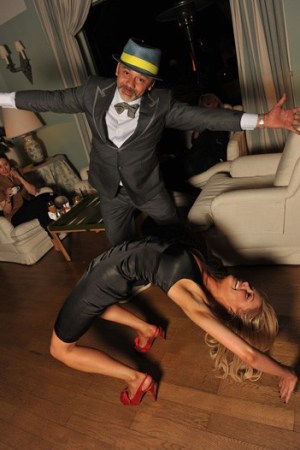 British media man Charles Finch held his second annual Finch’s Quarterly Review dinner at the Hôtel du Cap-Eden-Roc on Monday, bringing out his loyal crew of famous friends and clients. And though Cannes is all movies all the time this week, Finch revealed that his new clothing line Chucs will be sold in a store he will open on Dover Street this summer.

“It’s sun, sea, sand and mountain,” Finch said of the collection, which will include old-school puffer jackets based on archive designs by Finch’s grandfather, George Ingle Finch, who, he claims, invented the item. Finch’s Savile Row tailor, Anderson & Sheppard, is helping develop shorts, and he even got some tips on fit from L’Wren Scott.

“I enjoy Charles’ sense of manners and style,” said Harvey Weinstein. “Whatever Charles would do is a return to old-fashioned glamour and I like that.”

Cuba Gooding Jr. was continuing what is shaping up to be several straight days of partying, beginning at Le Baron in Paris last week. “I landed here [last Wednesday], fell fast asleep and woke up just in time to put my tuxedo on,” said the actor, who stars in the soon-to-be-released “Red Tails,” written by George Lucas, which is based on the story of the Tuskegee Airmen, the first African-American pilots to fly in a combat squadron during World War II.