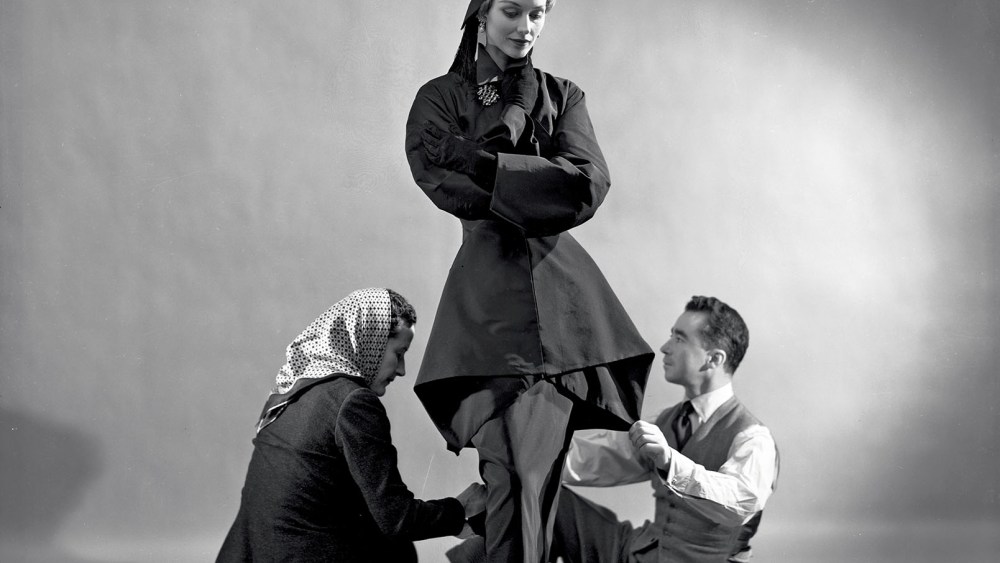 This is what the fashion world owes Charles James: down jackets; the wrap dress; bold shoulders; cocoon coats; zippered dresses; bustles and other Victorian or Edwardian elements in modern fashion; unusual color combinations such as ice blue with amber and pale rose; ribboned cloaks, along with synthetic fabrics.

James is probably best known for his flamboyant evening gowns, which were built upon complex structures, such as the four-leaf-clover gown and the telephone evening dress. But he also designed the first sports bra for Mary Ellen Hecht, a department store heiress who was a niece of Gertrude Stein’s.

James, who is often called the only true American couturier, was an imaginative and inventive designer who influenced generations of others throughout the world, among them Christian Dior, Halston, Schiaparelli and Yves Saint Laurent. The New Look owed a great deal to James’ exploration of Victorian silhouettes, while Saint Laurent was particularly influenced by his color sense. James had many museum exhibitions throughout his career, including one at the Met’s Costume Institute in 2014, “Charles James: Beyond Fashion.”

“Dior believes that he copied him,” says Michèle Gerber Klein, the author of a new book about James, “Charles James: Portrait of an Unreasonable Man/Fame/Fashion/Art” (Rizzoli New York). It has a forward by Harold Koda.

James was the son of a British army officer and wealthy Chicago socialite and started his career in fashion in Chicago, opening a millinery shop in 1926 under the name Charles Boucheron because his father had forbidden him to use the family surname. He moved to New York two years later and opening another millinery shop in Queens, by 1930 designing his famed spiral zipped dress and the so-called taxi dress. (It was dubbed as such because it was so easy to wear a woman could slip in and out of it in a cab.) He later moved to London and opened a store there, licensing his designs to retailers such as Lord & Taylor and Bergdorf Goodman. By 1939 he was back in New York.

Early in James’ career, the celebrated stage designer Oliver Messel gave him assignments to design clothing for the theater. “He was the one who put James back in touch with the Victorian inspiration [which inspired] the New Look,” Klein contends.

No one denies James’ creative contributions, but he was also a singularly difficult man who, although he came up with many licensing and branding ideas that were notably prescient, was infamous for his poor business practices, bankruptcies and even chicanery in financial matters. He famously spent seven months developing a sleeve, but he was also capable of revising a dress over and over again up to and past the time of the event to which it was supposed to be worn. In addition, he sometimes gave the businesses with which he had licensing contracts pieces that had already been designed and paid for by private clients.

James had close relationships with several of his private clients, and his interactions with the most gifted among them, including Standard Oil heiress Millicent Rogers and journalist Austine Hearst, could be characterized as collaborations. He was very inspired by Rogers’ beauty, her body and her ideas for clothes. He continued to create skirts and dresses for her even during the period when she was living in Santa Fe toward the end of her too-short life.

Actress Jennifer Jones was another avid client who used his evening dresses for red-carpet dressing. One early muse was Anne Messel, sister of Oliver Messel, who was the mother of Anthony Armstrong-Jones, aka Lord Snowdon. She wore James’ clothes for years at the beginning of the designer’s career. James eschewed prints almost completely, but he once made her a dress in, of all things, a Walt Disney Snow White print.

Klein, who lives in a beautiful art-filled apartment on Park Avenue with her dachshund Wicket, took up James because she wanted to write a book, and two friends of hers, R. Couri Hay and Roger Webster, had recorded some interviews with the designer, whom they had befriended toward the end of his life. They thought that she would be a good fit as a biographer because of her background in fashion. Klein, a slender and stylish woman who was wearing a Bruno Cucinelli dress, has worked for Neiman Marcus, the Tobe Report and launched Joan Vass USA.

James startled a number of friends by suddenly marrying when he was in his late 40s. His choice of bride, Nancy Lee Gregory, was a plain but stylish heiress from Kansas City, Mo. She had been his client for several years; she was introduced to James by her first husband.

Most people who knew James knew that he was gay. He was as open as it was possible to be about his orientation at the time. But his romance with Gregory, who became his muse, was a love match, and they had two children. They went from lavish residences to more mundane ones, but she remained fond of and respectful toward him even though he ultimately ran through most of her money and couldn’t afford to keep a roof over their heads. They eventually divorced, and he spent his final years living at the Chelsea Hotel, where the owner, a big fan of artists, didn’t charge him rent. James died of bronchial pneumonia in 1978 at age 72.

While James’ contributions to fashion are renowned, his tangential relationship to the recent #MeToo movement is perhaps less well known. Coinciding with the Met exhibition  about the designer’s work, movie mogul Harvey Weinstein revealed that he had signed a licensing agreement with James’ two children to reintroduce the label with new designs. But the Luxembourg-based Luvanis company had already registered the trademark in numerous countries worldwide and sued The Weinstein Co. and James’ heirs. Weinstein eventually dropped his plan in 2016 and Luvanis and James’ children teamed to relaunch the label, although no products have yet been shown.

Even in his heyday, James had difficulty letting any insult or setback pass, and he habitually wasted enormous amounts of time and money on any number of lawsuits, some based in real wrongs and others simply frivolous. “Totally what wrecked him was that stupid litigation that he wouldn’t give up,” Klein says.

She attended Bryn Mawr, and says that the subject of her next book will be a fellow student there during her college years, Holly Maddux. Maddux was a charismatic young woman from a wealthy family who got into a relationship with Ira Einhorn, a bombastic, obnoxious countercultural fellow who pretended that he had invented Earth Day. (He hadn’t — that distinction belonged to Sen. Gaylord Nelson.) When she broke up with him, he killed her and kept her in a trunk in his apartment for 18 months until this was discovered because of a foul smell. Just after Einhorn was arraigned but before he went on trial for murder, he managed to leave the country and remain on the lam for 23 years, when he was finally extradited. He had been convicted of murder and sentenced to life in prison without the possibility of parole in absentia. He was tried again with the same result.

Klein remembers Holly as a charming, beautiful eccentric who would sometimes walk around campus with a possum on her shoulder.  “She was a femme fatale,” Klein recalls, adding that, since Maddox looked quite a bit like her, the many men who had been dumped by her friend often tried to go out with her.