"There are definitely some scenes in the movie that are intense, to say the least," says Plummer. 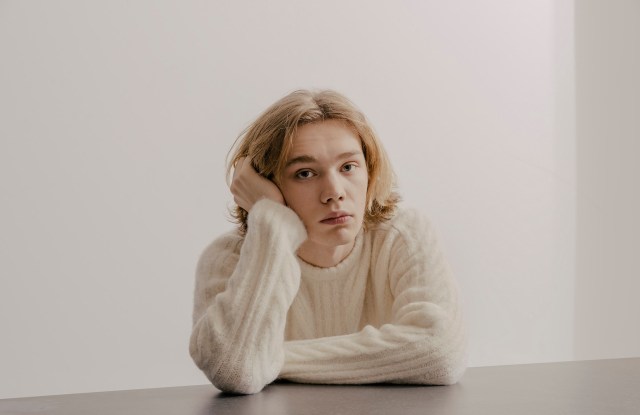 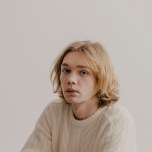 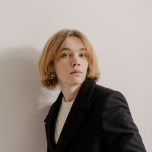 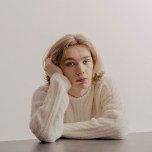 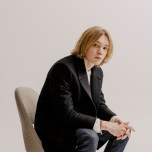 In the worlds of film and fashion, it’s hard to deny the power of a name.

“This is Theory,” says the young actor Charlie Plummer, when prompted about his wholesome white cable-knit sweater during a photo shoot. “I don’t know what the coat is.” He opens the suit jacket in search of a label, and reads it off: “C-O-S…”

Plummer is having a breakout year, cemented by his starring role in Ridley Scott’s latest, “All the Money in the World.” The Getty family biopic is packed with recognizable names, including Michelle Williams, Mark Wahlberg and Christopher Plummer (although playing his grandfather in the film, he has no relation to Charlie.)

“I just sent in one audition tape,” Plummer recalls of the casting process. “My girlfriend actually taped it on her iPhone, and also read with me, so it was like a shaky camera.” His casting agent wasn’t too impressed with the quality. “She sent feedback like, ‘Charlie needs to do much better audition tapes.’ So I thought for sure I was, like, ‘Oh my God I totally ruined my chances.'” (Although it couldn’t have hurt that his girlfriend, Samia Finnerty, is also a professional actress.)

“And three weeks, four weeks later I got the part, and that was it,” Plummer continues. “It was really quite the surprise. I was in the city and I got the phone call, and I was really shocked, I was pretty speechless. Because I had no idea, we hadn’t heard any feedback, there was no, like, it’s down to you and one other person. It was just, send in a tape, and no word. I thought I really hadn’t gotten it or wasn’t getting called back and then,” he snaps his finger, “just like that.”

The upbeat and gracious 18-year-old began his foray into acting when he was nine years old at The Depot Theatre, a small community theater near Cold Spring, New York, where his grandparents have lived for many years.

“We did an adaptation of ‘Star Wars’ and I played Obi-Wan Kenobi,” Plummer says of his first role. “But the part I worked on and really fought for first was Rooster in ‘Annie Jr.,'” he continues. “I really worked really hard on that audition. I ended up getting it, but that was when I started to really fall in love with [acting].” Afterward, Plummer began taking acting classes in New York, navigating his way to film and television in his early teens.

For “All the Money in the World,” Plummer takes on the role of John Paul Getty III, the grandson of penny-pinching oil tycoon — and then-richest man in the world — John Paul Getty. In 1973, when he was 16, the younger Getty was kidnapped in Rome and held ransom. While in captivity, his ear was notoriously sliced off and mailed to a local newspaper.

“Certainly it’s an interesting role, it’s an interesting story,” says Plummer. “I wasn’t put in any stressful situations that I had to deal with, anything other than what was right in front of me. But what was right in front of me was a pretty intense situation, just given the story and what the character was going through. There are definitely some scenes in the movie that are intense, to say the least — and pretty painful and scary.”

To prepare for the role, Plummer explored media coverage of the kidnapping and read a few books about the situation. He stopped short of interacting with the Getty family. (Getty III passed in 2011 and has a son, Balthazar Getty, also an actor.)

A still from the film.  Fabio Lovino

“I think the other thing that was important for me was to see [Scott’s] interpretation of [the story], because of course he’s the man leading the way,” says Plummer. “I just really wanted to be able to have a conversation with him about what kind of a take he wanted to have on this experience, and the experience of this person’s life,” he continues. “I think for me as a young actor, especially, my priority now and hopefully for a very, very long time is just to learn as much as I can, and to have someone like [Ridley] that you get to talk to everyday and learn from is really the greatest gift in the world.”

The young actor repeatedly expressed gratitude for the opportunity to work alongside some of the industry’s biggest and most respected players. However, he didn’t get to act opposite Christopher Plummer, who was slotted into the role of oil tycoon of John Paul Getty following accusations of sexual harassment against Kevin Spacey earlier this fall. Despite having already completed the film — with marketing materials in place — Scott was able to reshoot with Christopher Plummer and still keep the film on track for its targeted Dec. 25 release.

“I haven’t spoken to any of the cast or crew at all directly,” offers Plummer, who wasn’t involved with any of the reshooting. “It’s such an impressive thing to be able to [reshoot] so quickly and take the time to do that, so I’m just so proud to be associated with the people who are doing that. To fight so hard for this film, is really a wonderful thing.”

He continued to lavish praise for the film’s acclaimed director, who recently turned 80 and whose résumé is essentially a must-see film guide: “Blade Runner,” “Alien,” “Black Hawk Down,” “Thelma & Louise,” “Gladiator” — the list runs on.

“He leads by example, and he has such an incredible work ethic,” says Plummer of working with the director. “He is so concerned with the present moment and whatever’s happening right in front of him. That’s one-hundred percent of where his priority lies. With Ridley, it’s just about that moment on camera — not thinking about tomorrow, not thinking about yesterday, just whatever’s right in front of you. It’s just always wonderful to have a director who encourages you so much to focus on the present,” he continues.

“Not only does he work so hard, but he really enjoys the people he works with and enjoys the opportunities that he has, and he still does after working for so so long now. I think that was a huge takeaway for me. He takes his work incredibly seriously, but he doesn’t necessarily take himself too seriously, and I think that’s a really important lesson, for me especially, as a young person.”

In September, Plummer took home the Marcello Mastroianni Award for Best Young Actor at the Venice Film Festival in September for his lead role in “Lean on Pete.” The indie film, which costars Steve Buscemi, will be released in the spring.

Who are some people he hopes to work with down the line? “I could take up your whole day,” Plummer says. “I think one of my favorite directors is P.T. Anderson — living directors, I should say. And Spike Jonze is one of my favorites, Gus Van Sant. In terms of actors and actresses, I think Joaquin Phoenix is probably my favorite film actor. Mark Rylance, of course, Meryl Streep is one of the most talented actors alive. I’m so new to this, that I’ll just see a film and gravitate toward a person and performance, and the prospect of being able to work with them is just so exciting for me.”

Still a teenager, Plummer certainly has time on his side to add to his accomplishments.