There’s never been a time in Ella Balinska’s life when she did not throw herself completely into the task at hand.

As a kid, if she was assigned an essay with a 5,000-word requirement, she’d think to herself, “challenge accepted” and bang out 8,000 words.

Every sport she played — netball, lacrosse, track and field — she’d come at with a competitive energy.

And when the 23-year-old southwest London native discovered she loved acting, she went hard. Balinska applied to drama schools in the U.K. with competitive acceptance rates, which filled as low as 25 open spots a year. She figured, “If I get in, this will be something to keep going with and to pursue.”

She was accepted into the Guildford School of Acting, then went on to Arts Educational and the National Youth Theatre. There, she learned about herself in both a physical and an emotional sense; all the other kids knew exactly what kind of acting they wanted to do: period dramas, comedies and so on. “What’s my thing?” Balinska wondered.

She couldn’t find it until she took one unit on stage combat.

It was like having the vocabulary for a language in which she was fluent. She understood her body, and the space she took up, felt thrilled by the rush of energy she experienced while telling a story and doing stunts. Balinska was also freed, knowing she had found her niche. Everything clicked. 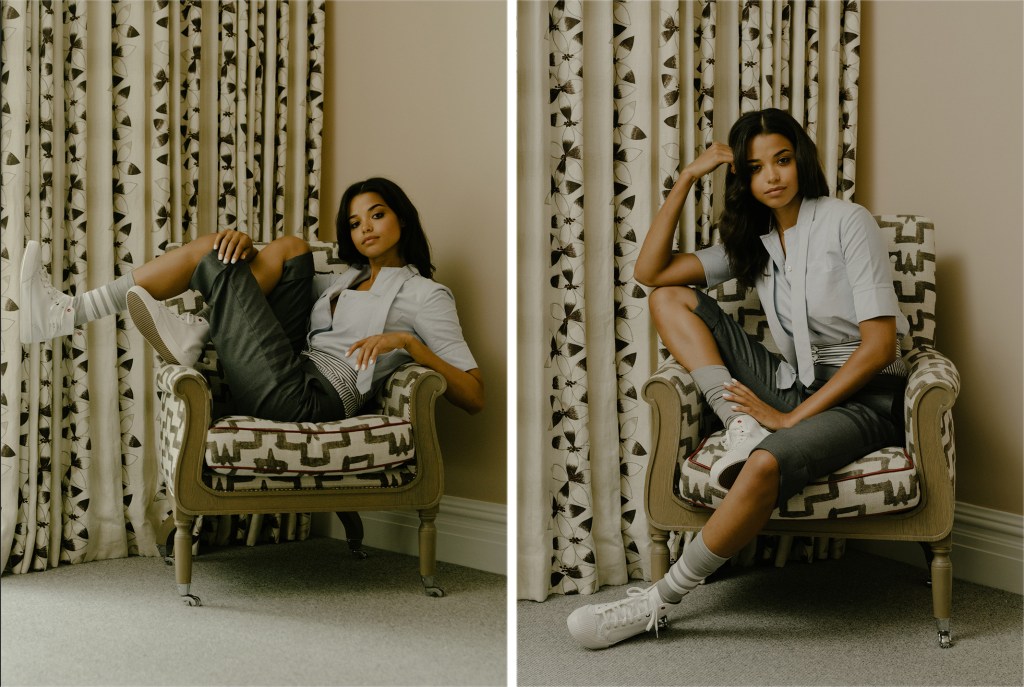 Nearly five years later, Balinska has graduated from various acting academies with honors-level knowledge of stage combat, including the use of 12 different weapons (“13 including my fists,” she notes). She’s gotten noticed by the film agent Femi Oguns, who was responsible for the breakouts of actors Letitia Wright and John Boyega and who invited Balinska to join his Identity Agency Group. She’s been picked up for indie shorts like “Tiers of the Tropics” and “Room.”

But her biggest moment has just come: She’s starring as Jane Kano, one of the three new “Charlie’s Angels” in the 2019 reboot film, out Friday. With Kristen Stewart as Sabina Wilson, Naomi Scott playing Elena Houghlin and director/costar Elizabeth Banks in the role of Bosley, the new version of the classic female spy thriller takes on an entirely new identity.

For Balinska, in particular, it was an opportunity to put to work her two great loves: sports and acting. Sitting in her hotel room a few months before the movie’s release, the actress lights up when discussing how her sports background comes into play in the movies she’s working on.

“This is a really exciting topic for me,” she says, folding her long legs in a pretzel and showing a toothy grin. “When you do a lot of sport, you gain physical awareness, you know your strengths, you know your limits, you know how to push yourself in certain ways — even mental awareness. It’s a discipline. You wake up and you train.”

When she first auditioned for the role, she thought no one would look twice at her reel.

“I was like, I’m not gonna get this,” she cries out, laughing. “We’re gonna have a real fun time doing this audition with no pressure because no one’s going to see it anyway.” But the “Charlie’s Angels” team requested a conference call with her a few weeks later, when she was on set working on another project.

“I pretended I was going to the bathroom, went outside and the team was like, ‘So we haven’t had any updates, but we’ve got someone on the line who might,’” Balinska explains. “And it was Elizabeth Banks being like, ‘Hey, Ella! The role is yours if you want it!’”

She flew to Berlin to start filming, where she lived in the same area as both her costars Stewart and Scott. They got along as soon as they met, she says, adding it’s “a sisterhood onscreen and offscreen.”

For one of their first tasks together, the stunt team had the three actresses demonstrate what the moves for a fight scene would look like.

“That’s the easiest way they could think of to get a full digest on how we move,” Balinska says. “We did this weird, three-way, fight-plait thing. It was like a fight braid with our bodies. That’s as far as I’m going to explain it. It was a fight braid. But it was just us making mistakes and failing and succeeding and that little activity was just a great way to bond. And then I think from that moment, all physical boundaries, anyway, were broken.”

By pure coincidence, Balinska has worked with a number of women directors, including Isabelle Sieb on the show “The Athena,” and Banks for “Charlie’s Angels.”

“That is called progress, which is exciting,” she says, banging on a table for effect. “Elizabeth knows what she wants and she will get it. She’s an actor’s director. So you feel safe and you feel trusting. There’s no insecurity as an actor, you’re never left thinking, ‘Is this the right thing?’ She’s so supportive; she’ll be cheering behind the monitors if she sees something that she likes.”

All of Balinska’s work leading up to “Charlie’s Angels” has prepared her for this moment. She doesn’t feel overwhelmed on set because she is familiar with the pace of the workday, the equipment, the norms. She knows her body and her limits, which, at times, feel infinite.

“I’m investing myself 100 percent into this, because I couldn’t think of any other way to do it. It’s all just a big something, whatever this is, and it lives here,” she says, pointing at her heart.