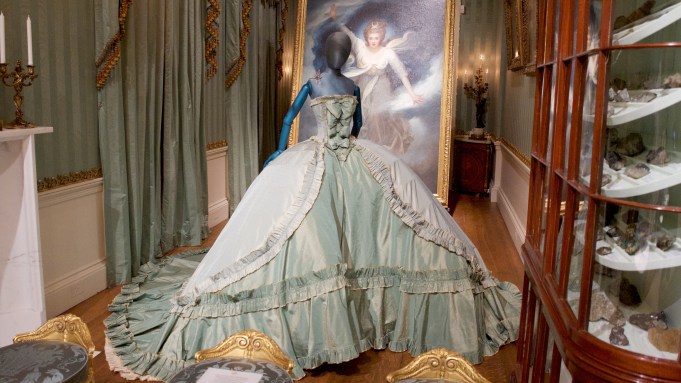 That warning, which was not heeded, was just one of the inside jokes emblazoned on a stack of navy wool sweaters worn by Andrew Cavendish, the 11th Duke of Devonshire, part of a grand — and quirky — exhibition that opens March 25 at Chatsworth House, one of England’s largest and most famous stately homes, and the family seat of the Dukes of Devonshire.

Six years in the making, “House Style: Five Centuries of Fashion at Chatsworth” is a close-up of the aristocratic family over five centuries through the lens of their lifestyle — their fashion, uniforms, jewels, parties, art collections, traditions and love of the natural world.”

“Chatsworth is a magical place, not a monument, but a home,” said Alessandro Michele, creative director of Gucci, who used Chatsworth as the setting for two ad campaigns last year. Michele said he loves seeing the natural world blossom around him at the house — the lush gardens, the bejeweled bug pins that the 11th Duke gave to his wife Deborah Mitford, the carved serpents on walls and columns (one of the family symbols), the cutout paper butterflies slipped into scrapbooks, and the family’s meticulously labeled rock, fossil and crystal collections.

“Animals and nature are very powerful, and the family has always understood that,” said the designer, whose collections for Gucci are alive with bee, flower, bird and snake motifs.

The show is the brainchild of Laura Cavendish, whose husband William is the Earl of Burlington and heir to the dukedom. She said the idea came after “rustling around” the storage rooms with her mother-in-law, Amanda, the Duchess of Devonshire, and that watching it take shape was an education, “and a very good way to get to know my husband’s family.” Clothing came from the Chatsworth storage rooms, but also from the Victoria and Albert Museum, the Museum of London, and the Dior archive, and other sources.

The new show is also a tale of the strong women of Chatsworth — the Devonshire duchesses, daughters, sisters and nieces who shaped the family’s history with their power and pizzazz.

“It all starts with the women,” said Patrick Kinmonth, who designed the exhibition, including all the sets, interviews and films, with Antonio Monfreda. “Backed by their husbands, women were allowed to make a major statement here,” he said of the unconventional bunch who lived large and loved their fashion.

The dynasty was founded by Bess of Hardwick, the 16th-century countess, businesswoman and close friend of Queen Elizabeth I, who built Chatsworth. Since then, the family has counted women including the Georgian-era fashion plate Georgiana Spencer, Kathleen “Kick” Kennedy, Adele Astaire, and Deborah, known as Debo, Mitford, the late Dowager Duchess of Devonshire and the youngest of the bright and — often controversial — Mitford sisters.

The stylish Debo, and her granddaughter Stella Tennant, play a big part in the show. Pieces from their wardrobes — Balmain, Chanel, Balenciaga, Christian Dior, Oscar de la Renta, Erdem, Christopher Kane, John Galliano and Alexander McQueen — are on display, as are a rubber chicken handbag and coin purse (property of Debo), and the Converse high-tops (regularly whitened by the valet) that her husband Andrew, the 11th Duke, wore in the Seventies.

“There was extravagance — and thrift — everywhere,” said Hamish Bowles, who curated the show, adding that when Laura invited him to have a look at the boxes of clothes that were piled to the ceiling at Chatsworth, he found a vast array of pieces, many of them from Debo’s closet: “mid-century French couture, Marks & Spencer and things she bought from agricultural fairs,” Bowles said.

The show highlights all those extremes: There are rooms dedicated to the famous Devonshire House Fancy Dress Ball in 1897, that had forced guests to dash to the House of Worth — and other couturiers of the day — to create their lavish costumes, inspired by Salammbo; Zenobia, queen of Palmyra; Dido, queen of Carthage; and the Black Prince.

Another room is filled with tailor-made tweed shooting, fishing and riding garb, while another showcases those navy blue sweaters with their funny slogans, and a pair of the 11th Duke’s tapestry slippers (a Christmas gift from Debo, his Mitford wife) as worn and tattered as a puppy’s chew toy.

There are so many intimate glimpses of everyday life and family tradition — christening gowns, ermine and velvet coronation robes, wedding dresses, memento mori and stacks of scrapbooks, sketchbooks, travel diaries, photographs and pictures. Many reveal the family’s silliness and sense of humor: a small profile painting of the seventh Duke as a teenager shows him dressed in formal attire — and suffering from the mumps. The back of the picture reads: “William in the DUMPS with the MUMPS.”

The show also puts the spotlight on the Cavendish family’s compulsion to collect precious things: There are ceramics and sculptures on show next to similarly shaped hats by Prada, Lanvin and Philip Treacy, as well as Inigo Jones sketches and drawings, and portraits of generations of duchesses by painters including Thomas Gainsborough, John Singer Sargent, Diego Velázquez, Lucian Freud and Pietro Annigoni.

Rizzoli is to publish “House Style: Five Centuries of Fashion at Chatsworth,” with a foreword by the 12th Duke of Devonshire who calls it “the most ambitious and amazing show that Chatsworth has ever done.” The exhibition is part of a three-year pledge by Gucci to support cultural activities at Chatsworth House and the Duke said the brand’s support allowed the Chatsworth House Trust charity to “think bigger than it had ever dared before.”

“House Style” runs from March 25 to Oct. 22, and Laura Cavendish has said she hopes it will travel abroad after that. “I’d love it to go to America maybe — that would be wonderful. We’ve worked long on this, and I think it’s an exciting show for us.”